April 18, 2020
comment
In one of Janessa Johnsrude's photos, a mother and daughter sit perched in an open window, smiling at one another, a big, milky-eyed dog between them. Their tableau, framed by the window of the house, is overlaid with the branches of an apple tree bright with pink blossoms and a set of copper wind chimes shine at their right. It's an idyllic scene full of affection. So much so that you could forget they are sheltering in place during a pandemic. 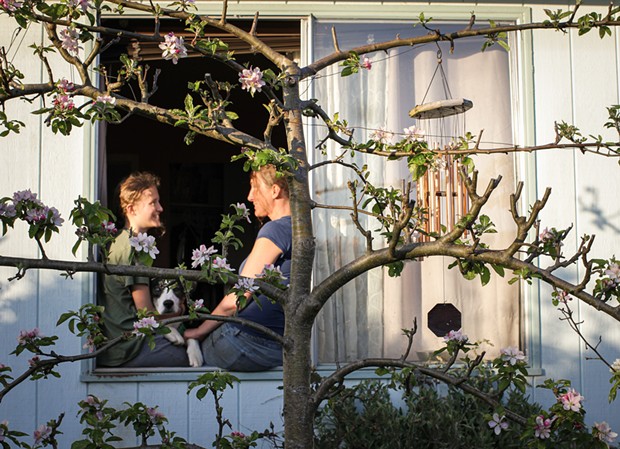 The portrait of LinZi, her mother Laurel and their dog Bender is one of a Sheltering in Places series Johnsrude is working on, capturing images of her friends, neighbors and friendly strangers in her Blue Lake neighborhood — all from a distance as they hunker down in their homes. (See a handful of the photos with Johnsrude's comments in the slideshow below.)

Originally from Saskatchewan, Canada, Johnsrude came to Humboldt County nine years ago as a student of Dell'Arte International, were she now serves as a faculty member, resident artist director of the Prison Arts Program and associate director of the school's Bali program. More accustomed to the ephemeral arts of the theater, photography was something she mostly did while traveling before COVID-19. "It's not my regular medium but it's what I can use at the moment to express what I'm feeling. … It's the medium that I felt drawn to in this moment."

With Dell'Arte's schedule paused and county and state orders to stay home, Johnsrude found herself with some of the same frustrations as many of us rattling around our homes. "I was really sick of myself," she says over the phone. "I went for a walk around Blue Lake. And it's so beautiful and I had this urge to connect outside of myself. … I saw people moving around in their homes and yards, and I was curious about them."

That curiosity led her to ask a few friends if she could take their pictures from outside. More friends shared the images on social media and Johnsrude set up a website, www.shelteringinplaces.com. "Now I'm getting calls from people I've never met before," says Johnsrude, adding that she's been invited to the Blue Lake Rancheria for a photo. She'll get a message through the website or Instagram, then set up an appointment to stand outside and shoot photos. "I stand very, very far away." 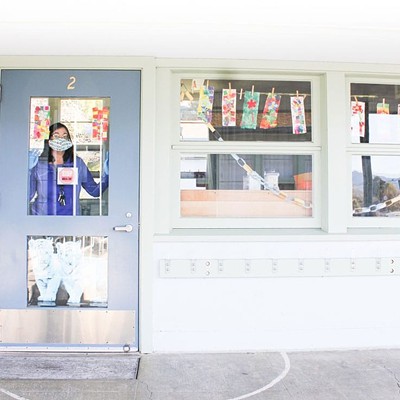 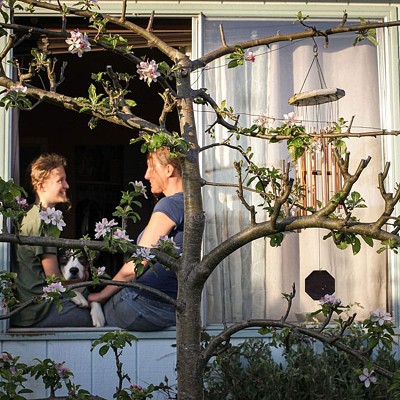 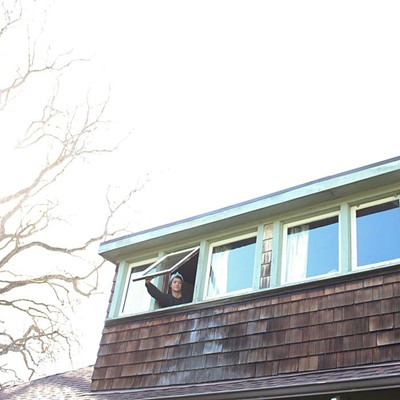 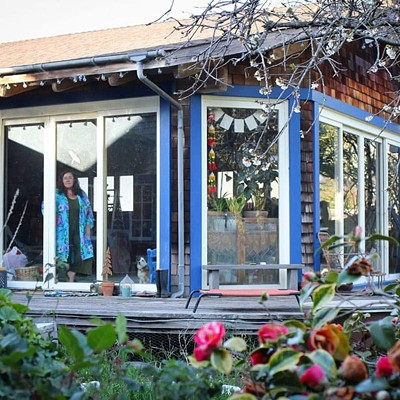 Janessa Johnsrude's Sheltering in Places
By Jennifer Fumiko Cahill
Click to View 7 slides
In one photo, a cheerful family waves from windows on the second floor. In another, a woman gazes through her glass patio door in a horned headpiece decorated with feathers and cowrie beads. As each subject, framed by a window or a door, looks into the camera or at a family member, there is a balance of intimacy and separation, isolation and connection. "I can't even see in their spaces," says Johnsrude, who is "kind of intrigued by the barriers, the way the window keeps you away from your subject."

Johnsrude isn't surprised to see these photographs address the same themes of loneliness and wanting to connect that frequently arise in her theater work, especially now that we are required to remain physically apart from those outside our households.
"I think that, maybe, at this point, people can look at the images and relate. It's an act of love to take someone's picture," she says, explaining that it's a way of acknowledging their existence. "But at the same time, you're taking a picture of someone who's trapped."

That's a familiar theme for Johnsrude, too. "I think that comes from my time working with people who are incarcerated and who aren't really seen … I'm inspired by the power of seeing somebody else and what it does to be seen."

Johnsrude didn't originally set out with a goal for the project but now she muses over collecting 100 photos. Maybe 200. "It could turn into an interesting archive down the road," she says.

She credits fellow artist Gina Tuzzi, whom she photographed in her studio in a vivid floral kimono, for the hashtag #shelteringinplaces as a way to both gather and spread the project. Johnsrude is hopeful others will be interested in doing something similar in their own towns and contact her at shelteringinplaces@gmail.com, forming a "web of connection" that goes beyond Blue Lake or Humboldt. "It's a weird time to collaborate but as for the invention of what collaboration could be, this could be an opportune moment to figure that out," she says.

"If the sheltering keeps happening in waves," Johnsrude says, "we're going to have to figure out ways to connect with each other that feel real."