The Journal has received clarification from Caltrans spokesperson Myles Cochran on the language and intent of the contract it sent to artists who painted Caltrans utility boxes as part of the Eureka Box Art program in 2018, stating that it in fact grants all control and ownership of the artwork to the artists.

While page 4 of the document reads, with bracketed text by the Journal, “ASSIGNOR [the artist] hereby conveys, transfers and irrevocably assigns to ASSIGNEE [Caltrans] all of ASSIGNOR’s Copyright Ownership rights, title and interests in the Final Artwork,” those rights appear to return to the artist on page 6. There it reads, “ASSIGNEE [Caltrans] grants to ASSIGNOR [the artist], pursuant to this Agreement, a perpetual, exclusive, worldwide, irrevocable, sub-licensable, royalty-free license to use and exploit the Final Artwork, including in its Preliminary Works and final Material Object form.”

As to why the contract is necessary, Cochran further explained that aside from the need to repair and maintain the boxes, “the agreement also protects taxpayers from liability costs in cases such as a collision ruining a utility box, or, say Caltrans wants to post a picture regarding upcoming road work and there's some beautiful art in the picture, we can do that.” He also added that concerned artists can contact Caltrans for a detailed explanation of the contract and its purpose.

PREVIOUS:
A number of artists who painted utility boxes along Broadway, Fourth and Fifth streets in Eureka as part of a the Eureka Box Art program in 2018 have received emails from Caltrans asking them to sign over the copyright to their work. The request includes no further compensation and no clear explanation of why Caltrans wants copyright ownership. For some artists that offers little motivation to sign. 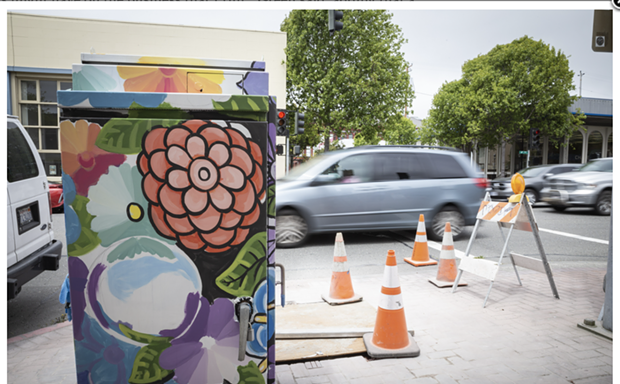 Blake Reagan, whose floral design sits at the corner of Fourth and F streets, was paid a $500 stipend for labor and materials two years ago when he spent four days painting the box. Not that he was in it for the money. “It was definitely not a profitable job. It was an opportunity to do some live public art,” he says. At that time there was no mention of a copyright agreement. He received the email through the city of Eureka a couple days ago and is still looking it over.

A copy of the contract Caltrans sent out, which the Journal obtained elsewhere, states that the signee, in this case any of the artists who painted boxes under its jurisdiction, would yield the rights "1) to reproduce and make copies of the work; 2) to prepare derivative works based on the work; 3) to sell or distribute copies of the work to the public or other transfer of ownership, or by rental, lease, or lending; 4) to display the work publicly; 5) to perform the work publicly; and 6) to enforce the work against unauthorized use," among others.


Lisa Savage, senior planner at the city of Eureka's development services department, says the city was asked by Caltrans to forward the document to artists who worked along Broadway, Fourth and Fifth streets, but that's as far as the city's involvement goes. “The city is not requesting anybody to sign anything regarding city boxes,” she says. Savage also says there was no copyright agreement presented to artists who painted the Caltrans boxes in 2018. Instead, there was a “blanket agreement between Caltrans and the city to cover all the artists,” allowing them to paint boxes with designs approved by Caltrans.

In response to an email inquiry from the Journal, a Caltrans headquarters statement read, "Since the artwork on U.S. 101 fully covers functioning utility boxes, the artwork may need to be removed during inspections and/or when performing maintenance. Caltrans requests that artists sign the agreement so that we can continue to inspect and maintain the utility boxes. While Caltrans will do its best to preserve the featured art on the utility boxes, it cannot guarantee that the transportation artwork may not be removed partially or fully during maintenance. We hope artists recognize that the agreement allows Caltrans to continue the placement of art within the state right of way and ensure unrestricted access to maintain its facilities while giving artists the exclusive right to their artwork."

However, "giving artists the exclusive right to their artwork" doesn't jibe with the wording of the copyright agreement. The Journal has requested clarification on this point and will update as soon as Caltrans responds.

Samantha Moore, whose "Cat Food" utility box was the subject of local and internet uproar at the time, got an emailed request as well. “I would definitely decline that," she says, "as my characters are already copyrighted.”

Since painting the box, Moore has moved to the Bay Area and does a brisk business in Cat Food merch — she just sold out of 200 plush strawberry cats but avocado cats are still available, with hot dog cats currently in production. Moore copyrights every one of her designs before she posts anything and keeps the paper trail to prove it. “I know my rights as an artist — well, I hope I do — and this is just a request after the fact and they can’t force me.”

The artist says she wouldn’t mind Caltrans sharing images of her utility box painting on its website or repairing damage to the work. Even utility box merch wouldn't get her to lawyer up. But she's not signing away her copyright.

Local attorney Kathleen Bryson has posted an offer on Facebook to help artists who received the copyright agreements free of charge.


Reagan, who genuinely enjoyed the utility box project and would do it again, is having a friend look over the contract before he signs anything. “I’m pretty sure they don’t mean any harm by that," he says, "but the copyright to our images is kind of all artists have.”