Drafting Along with Whirligig Beetles 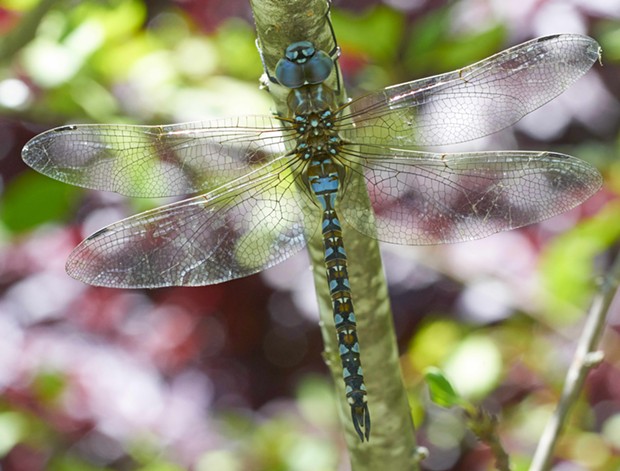 The other day I was talking on the phone with my fiance when I saw a large flying insect investigate a tree in my back yard. I made my excuses, set down the phone and got my camera. The critter in question was a Blue Eyed Darner (Rhionaeschna multicolor) dragonfly. Thankfully, they were both quite patient with me, and I got the photo.

Anybody who has spent much time walking along creeks and rivers has likely seen groups of small (¼ inch) oval black beetles swimming erratically in the surface film of the water. These are “Whirligig Beetles,” of the family Gyrinidae. This family has a number of adaptations to a life spent swimming in the surface film of the water. Researchers have found the hungrier they are the farther from the center of the group they go, leaving the safety of numbers for a greater chance of encountering food. Each eye is divided into two sections — one for viewing above the water, one for seeing beneath the surface. They practice “drafting,” like race cars and geese, one following a leader to take advantage of reduced drag. A waxy coating on their shells also helps reduce drag, making them so slippery the males have suction cups on their front legs to be able to hold on to females during mating. They carry a bubble of water under their wing covers to breathe if emergencies dictate they dive beneath the surface. This year, I'm seeing far fewer dragonflies along the stretch of the Van Duzen River I regularly walk. For example; in the past I might see half a dozen Bison Snaketails (Ophiogomphus bison) in one afternoon. Yesterday, I saw one, and none the day before. I suspect it is because last year the area was “discovered” by folks who now frequently ride ATVs down there. Hopefully the insects have moved on to less congested areas.