HumBug: Two Killers and a Charmer 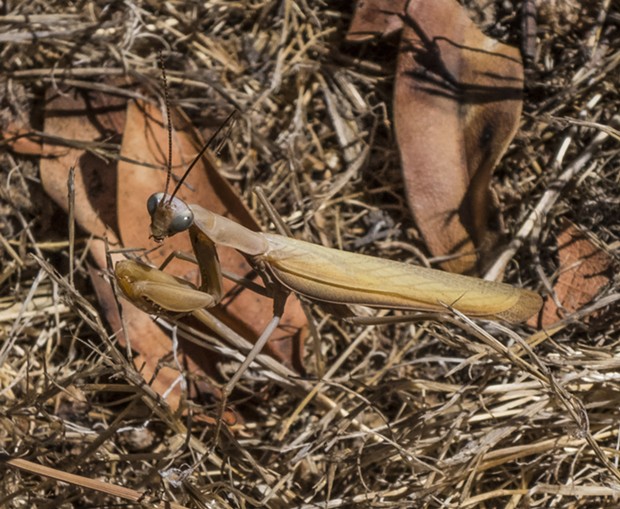 The insect season is winding down. The imported species of praying mantis, (Mantis religiosa) are mature now and can occasionally be seen flying. Insects only get fully developed wings in their final molt. Although there are some exceptions, mantises aren't among them. Flying, they look like less agile dragonfly. The four wings and size are about right, but there are no quick turns going after prey. They fly to get some place. Their hunting is done by ambush, not flight. Mantises are always photogenic. So when one flew overhead and landed in my front yard I got out a camera.

This species comes in either tan or green. This specimen was one of the tan ones. Mantids have the unnerving ability to turn their head and look directly at you. This one though had something unique about it. Its eyes were gray. Checking my image archive all the other ones I've seen all had eye color that matched their body. Why this one was different is a mystery to me.

Another large killer with wings that was out this week is the robber fly (family Asilidae). As lethal as the mantises hiding in the vegetation are, the robber is a killer on the wing. Taking prey on the wing as large or even larger than itself. Although not aggressive toward us, they can deliver what I understand is a very painful bite of mishandled.

Watching the Amaryllis belladonna, aka naked ladies, in my front yard I noted a moderate sized, extremely quick, starkly black and white striped bee. It was so agile it took a lot of exposures to get a few good images. Later, the photos showed it to be an urbane digger bee (Anthophora urbana). A solitary species these little bees dig holes in the ground and line them with a waterproof material they secrete to protect their offspring as they develop.