When I set out to take a couple of photos of the jumping bristletails on the back of my garage, I was not prepared for what I got.

They're interesting for being such an old order. The name Archaeognatha means “ancient jaw.” This refers to the primitive structure of their jaw. Jumping bristletails are one of the first insects to show up in the fossil record (about 390 million years ago) When our first vertebrate ancestors crawled onto land, they were probably greeted by something that looked much like what we see today and ate them. Early colonization of the land by arthropods created a food rich environment for the first tetrapods to exploit. 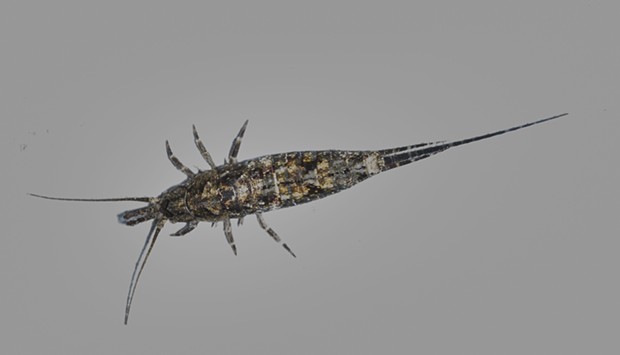 Since they are small, come out late at night and are shy of the light, the photographic technical details kept my attention. I was looking at the camera, not my subject. Mostly they look like 1-inch grey shrimp climbing around in the dim light. From some angles they have a subtle sheen but mostly they look mottled gray. However, once I uploaded them and displayed them on my computer screen, colors jumped out at me. They are covered with iridescent scales that shimmer, changing colors depending on the angles of the light source and viewer. It isn't a trick of photography but a trick of our eyes. In dim light, the kind in which you're likely to see these creatures of the night, our retinas are less sensitive to colors. Even colorful things take on the appearance of a black and white photograph in dim moonlight.

At the opposite end of the scale of modernity in the insect world, a large bumblebee chose my recycling can as a place to rest. Unlike the bristletail the members of the order hymenoptera (ants, bees, wasps and their kin). Bees go through four distinct life stages: egg, larva, pupa and adult. The bristletails merely grow larger with each molt, the young looking and behaving just like the adults. Bees are adapted to gather nectar and pollen from flowering plants, while the bristletail lives off of algae, moss, fungi and decaying plant litter — things that have been around much longer than flowers. 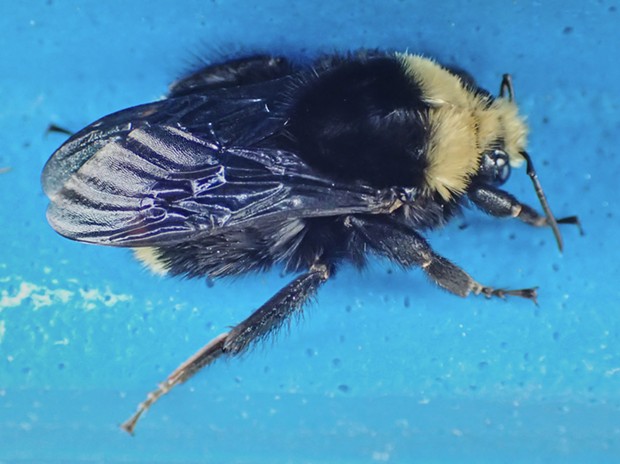 Some bees (including the one pictured) are highly social creatures. This one is likely carrying fertilized eggs to establish a new colony in the spring.