HumBug: Blooming too Early or Bugs too Late? Despite the weather lately, spring is happening, at least in the plant world. Last night on a walk, I saw fetid adder's tongue (aka “brownies,” aka Scoliopus bigelovi), and Indian plum (Oemleria cerasiformis) and a patch of naturalized daffodils, all in bloom. Along with brilliant yellow acacia and the pink and white fruit trees along the side of our local roads, the spring blooming season has started, insects or no.

Flowering plants exist to take advantage of the mobility of insects to disseminate their pollen more efficiently than their forebears. If the plants are bloomed out before their insect delivery system warms up enough to operate, it may be a thin year for the wild and naturalized fruit trees that feed much of the local wildlife hereabouts. If this happens as a single year glitch, populations will recover, but if it is an artifact of a persistent climate change, there may be many adjustments necessary to the range maps in our field guides as populations migrate and evolve adapting to the new normal.

Many flowers attract insects with heady perfumes and a reward high energy, sugary nectar to fuel them on their rounds. There are other strategies, however. Fairy slipper orchids (Calypso bulbosa) attract naive young bumblebees by color alone. They produce no nectar. The bees investigate and spread pollen. Eventually though, they learn and cease visiting the miserly flowers. 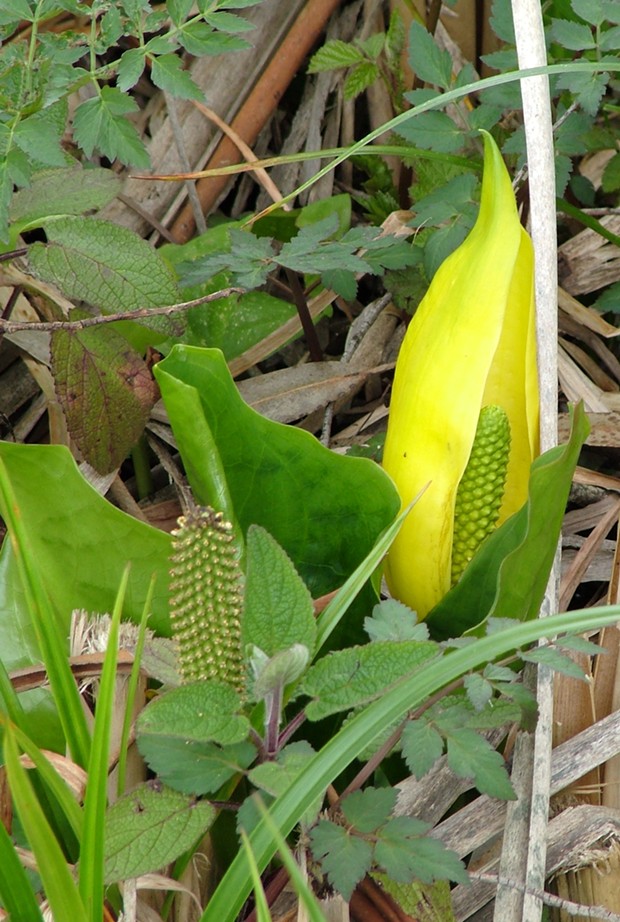 The fetid adder's tongue has a funky fungi smell which attracts fungus gnats. Western skunk cabbage (Lysichiton americanus) also emits a rank odor to attract insects. It has another slick trick up its sleeve. The yellow flower can raise its temperature to help melt its way out of the snow. Finally, in my garden the voodoo lily (Dracunculus vulgaris) has such a strong smell like rotting hamburger, for a day or two each year I've actually had buzzards swoop through my yard when they're in bloom.

They seem to attract blue bottle flies and Dermestid or skin beetles. Beetles of the family dermestidae are meat scavengers used to strip flesh from skeletons in preparation for museum displays and can be purchased on line to meticulously clean your trophy deer skull before you for hang it on your wall.