Late the other evening, my wife and I went out for a walk. Along the road we saw several large shiny brown millipedes. In the middle of the road, apparently investigating a smeared member of that species, was something that at first looked like a slightly smaller one. On closer inspection, it was something completely different. I didn't have a camera or a jar, so my very tolerant wife volunteered to stay and keep track the bug in question while I got something to collect it with. For the first time in years I actually ran (it was a short distance) and retrieved an empty spice shaker bottle. They're my favorite collecting vessel; made of tough of plastic they come in a convenient variety of sizes, are break-proof, clear and come with lids already perforated with air holes.

I'd recognized this species as the western banded glowworm (Zarhipis integripennis) from books, although I'd never seen one in person. Unlike the Douglas fir glowworm (Pterotus obscuripennis) I have written about before ("Glowworms and Fireflies," May 18, 2017) this one preferentially hunts large millipedes instead of snails. At about 2 ½ inches long, she's bigger than the biggest Pterotus and, instead of glowing solely from two body segments near the tip of her tail, this species glows throughout most of her body. The opaque tergites on her back block the glow in places giving her a ladder-like appearance.

Photographing these creatures is challenging since there just isn't a lot of light to work with and supplemental illumination can wash out the insect's glow. To make matters worse, this one really wanted to move around. After a couple hundred exposures, I returned her to the weeds near where we found her. With any luck, she'll meet a nice young fella and they'll make more of their kind. 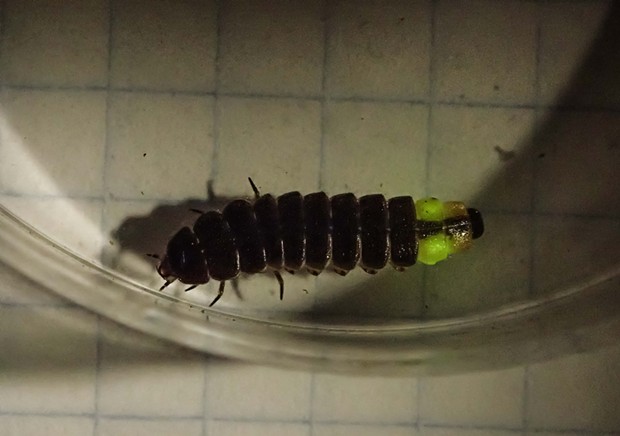