HumBug: Dining Out in June 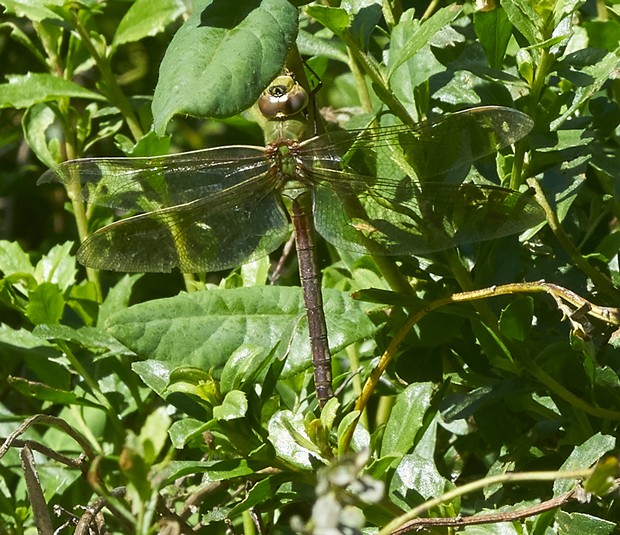 The fifth of June invited me to take my favorite stroll along the Van Duzen River. Things are at last heating up in the insect world.

While I was checking out some daisies, a shadow flitted past me. It was member of the well-known migratory dragonfly species, the common green darner (Anax junius). This is the first one of these I've seen this year. It is one of the largest dragonflies that frequents our area. Wear on its wings hints that it has travelled far. I reported the sighting to the Migratory Dragonfly Partnership, a citizen science project coordinated by the Xerces Society. The partnership collects sighting data on this and four other species of known migrators to better understand this behavior.

Another migratory insect didn't fare so well. What at first looked like a dried leaf fluttering in the wind turned out to be a painted lady butterfly captured by a crab spider. It brought to mind the fact that the redwood forests are fertilized by the annual migration and/or spawning, and death of salmon in our rivers. I wonder how much nutrition the annual migration of insects provides to our local ecology. A bit farther on, white clover provided pollen and nectar to some small blue-black bees. Despite there being several other varieties of plants flowering in the area, they seemed to patronize the clover exclusively. While many bees are happy to feed on a variety of flowers, some are highly specialized. Although this gives them an advantage in some ways, it also makes them dependent on a particular plant for survival.

Tiger beetles on the river bar don't have that problem. Displaying adaptability I had not seen before, two of them were dining on a dead bumblebee. Like many mammal predators, it seems they are not above a little scavenging when the opportunity presents itself.