HumBug: Best of the Bugs

December 15, 2019
comment
After almost five years doing a weekly blog it had to happen. With rainy, cold weather and the fact that over the last several years I've already written about most of the noteworthy entomological subjects hereabouts, this week I didn't see any new critters worth photographing or writing about. So I think I'll do what other writers do in similar circumstances and resort to a “Best of” article, selecting a half dozen of my all time best photographs with an explanation of what makes them my personal favorites. 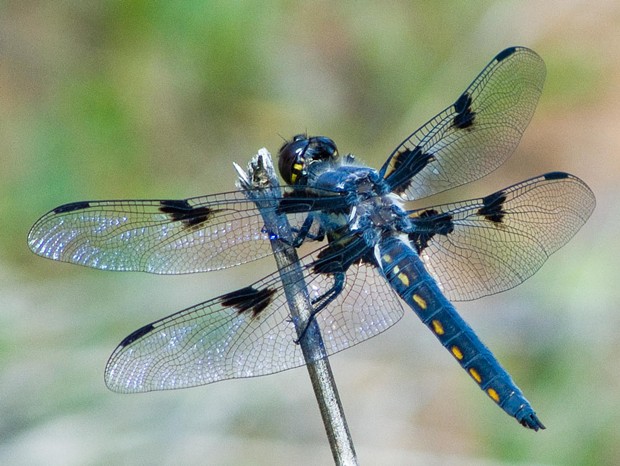 In 2009, driving across State Route 36 for work, I stopped at a wide spot near a small spring to stretch my legs. I got out my new digital camera and took a shot at a dragonfly perched on a stick. When I downloaded it onto my computer, I was amazed at how well it turned out. That one shot got me hooked.

Insects have been a lifelong interest, and photography was a natural outgrowth of a 36-year career in medical imaging technology. Technically, I know what it takes to get a good photo, and I know a bit about bugs.

My subject was a young male hoary skimmer. A few weeks later and it would have been covered with “prunosity,” a chalky white powder common to many species of the skimmer family. Timing is everything. 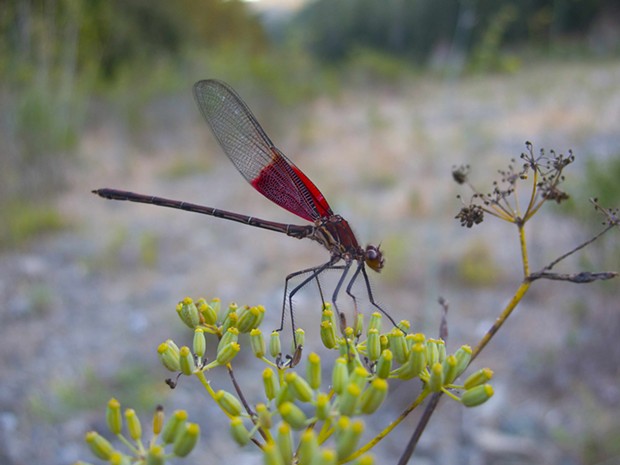 Following that single, almost accidental success, I started looking for subjects and exploring the capabilities of my equipment. My next dramatic photo was an American rubyspot damselfly. This one wasn't a quick snap and go. I chased it all over a rocky river bar with a twisted ankle, finally getting close enough to take dozens of exposures resulting in a single “keeper.”

I knew there were glow worms about and they would be challenging to photograph. I was right on both counts. They live in the redwood duff in my backyard. The problem is in the tradeoff between getting enough supplemental light to show the structure of their body and keeping it low enough that their glow is not washed out. Add the fact that they are living beings that react to my presence, moving and sometimes shutting down their glow. I've spent many late nights on my knees on the wet ground, holding my breath and a flashlight, taking hundreds of exposures to get one.

It was no great stretch to take a black light out and about in the dark to see what I could find. I was delighted to find the common crab spiders are florescent.

I seldom bring subjects inside, preferring to take their portraits in their natural habitats, but occasionally visualizing some particular feature requires a controlled environment. It was through getting a shot of a centipede's jaws that I discovered the optical properties of Saran Wrap. Finally, some subjects are simply dramatic in their own right, like our largest local moth the Polyphemus.