HumBug: A Recipe for History

Driving back from San Francisco, I stopped on the side of the road to take a couple of pictures and collect a few oak apple galls. About a year ago a tiny wasp laid an egg in the freshly growing leaf bud. When the egg hatched, the larva that emerged secreted a chemical that stimulated the surrounding tissue to grow into a growth about the size of a tennis ball. Inside, the larva fed on the tissues, molted, fed some more, repeating the process several times until it pupated (cocoon phase) and finally chewed its way out and flew away to its destiny. The “gall” was left behind. This process has been going on for millions of generations, and a good thing for western civilization. 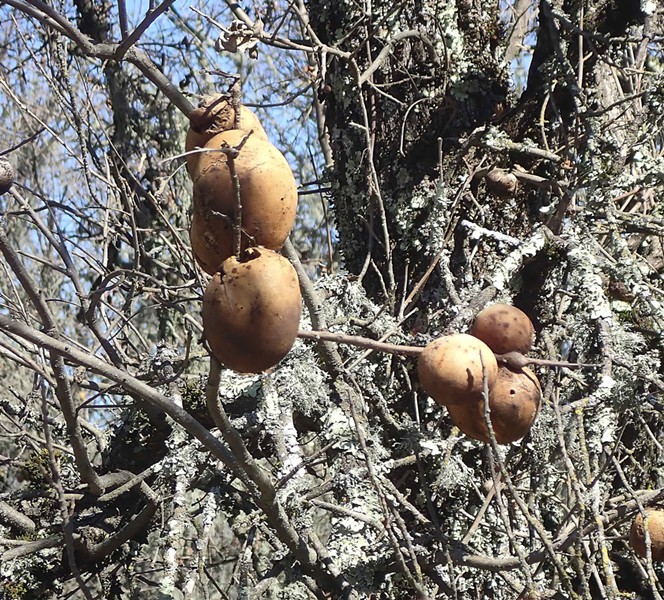 Along with the excessive growth the tree tries to fight back by secreting tannins, moderately toxic chemicals which oaks and other plants secrete in response to injury in an attempt to discourage further damage by foraging animals. As early as the time of Pliny the Elder, it was recognized that the action of an extract made from these galls on iron produced a permanent ink. Since that time up until the early 20th century iron gall ink has been used for important documents. There are a plethora of formulas, and so I decided to give it a try. I added a bit of vinegar to some swarf from my metal cutting bandsaw, to induce corrosion. I then crushed half a dozen galls with a hammer and put them in the cheap blender I use for non food tinkering with some water. I blended the dry fragments in water until they were about the consistency of oat meal. Finally I added some more water and mixed the two together. Almost instantly the solution turned opaque black. After a lot of fiddling I managed a moderate success. While my concoction will never replace commercial India Ink, nor will it be used to pen anything as important as the Magna Carta or Declaration of Independence, the process was interesting.