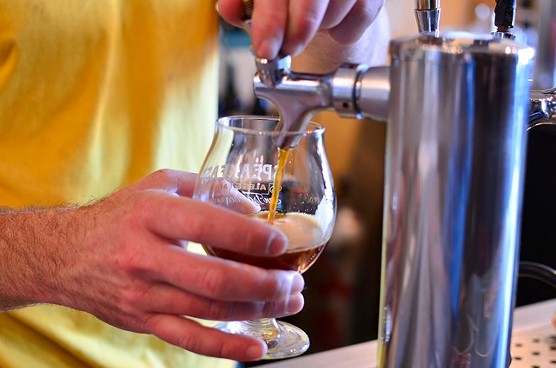 The Local Beer Bar is celebrating its second birthday on Saturday by releasing an anniversary ale whipped up with Eel River Brewery — a vanilla eisbier aptly named Stop, Collaborate and Listen (price TBA). Why? Because it's iced, iced, baby. What? We were all thinking it. And in one of the most scandalous abuses of press passes in history, the Journal popped in for a sneak preview. Several of us, actually. (Suddenly everybody's a journalist.) The heavy ale is served a little warmer so the vanilla and the oak come out, and the dark beer bite is cut by a caramel flavor. It's luscious stuff, perfect for fans of boozy, robust beers. But beware: the little glass packs a wallop at 13 percent alcohol. Maybe you should grab a stool.

According to Local owner Darren Cartledge, the final product took three tries with the tricky German icing process before aging several batches in a bourbon barrel. That might be why this sort of thing doesn't get made all the time. Old ales are meant to travel (see, the growler is part of our cultural heritage) and to age well, "collapsing on itself," says Cartledge. So in another two months, he'll be releasing a little more of his stock so you can see how it's developing. For science.

The taps open at noon tomorrow with the eisbier and a lineup of Cartledge's favorites. "Everyone has to drink what I like," he says.