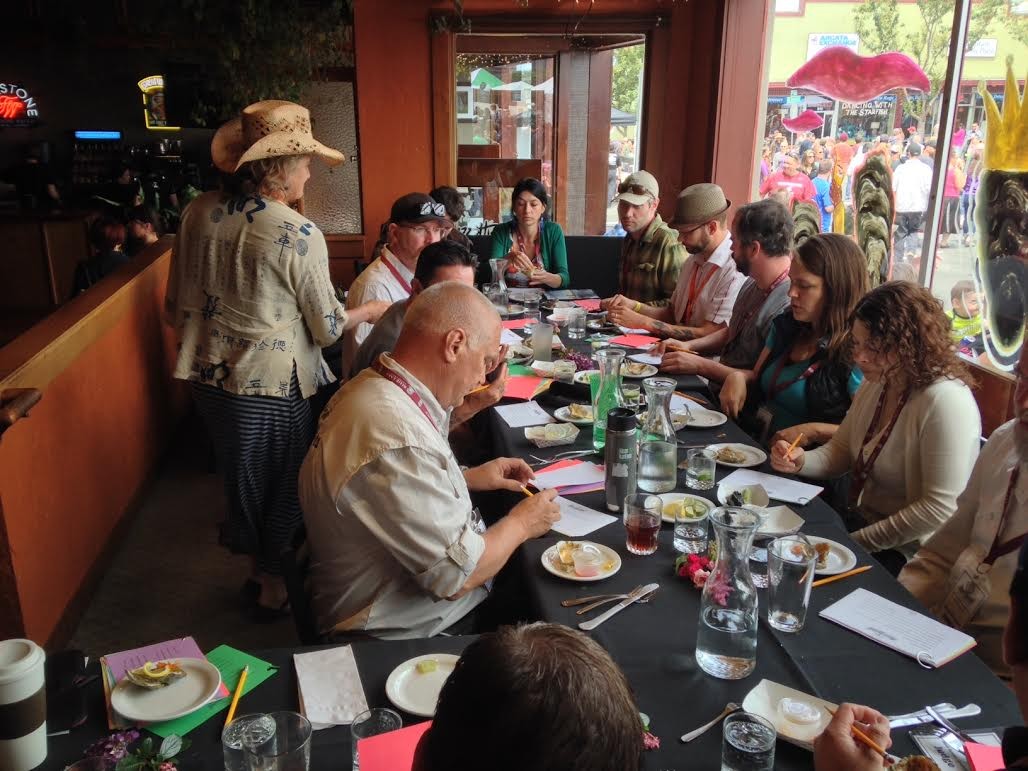 It was a rough room. At both ends of the long table in the window at Mazzotti's on the Arcata Plaza, judges were bemoaning an entry with over-seasoned and undercooked bread and wondering aloud who would plate up closed clams for a competition. The annual competition for best raw and cooked oyster, as well as non-oyster dish, was four contestants in. Judge and local caterer Brett Shuler, in his white chef's jacket, a pair of sunglasses on his head, surveyed the plates and shells on the table. "We haven't had our minds blown yet," he said. 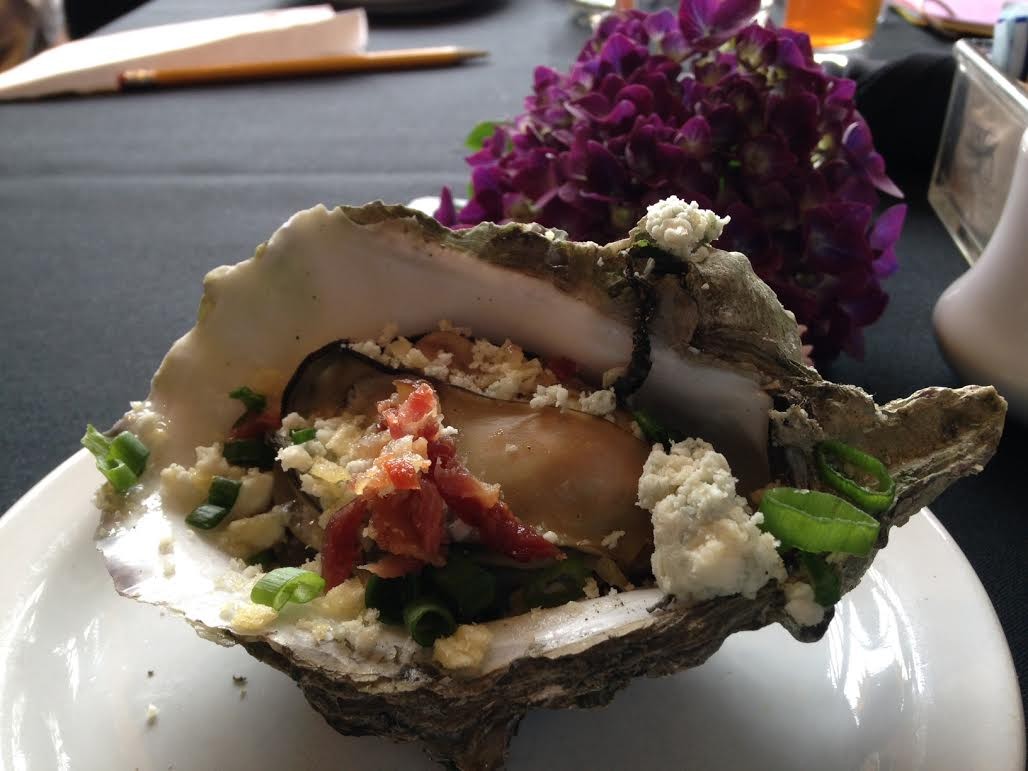 A volunteer swooped in with a tray of Thai oyster shooters with chopped lemongrass, setting off a buzz in the room. Some liked the dainty shot glasses, but the tartness and texture were overpowering for others. Shuler compared eating the bits of lemongrass to "chewing on toenails."

Last year's table chatter was far more forgiving, possibly because the panel was stacked with more pros this time around. Cherilyn Neider of Greenway Partners, the consulting agency that's set to hand the operations of Arcata Main Street back over to its own board any time now, said the selection process for judges changed this year. Greenway, she says, encouraged sponsors to send judges who are "interested in oysters, have no allergies and are willing to try a lot of things." Coast Seafoods, for example, sent chef Stacy Chatfield of Verbena Catering and Specialty Cakes. Neider said organizers had hoped to have a people's choice award, but it wasn't possible this time around.

A withdrawn entry left a gap in the schedule, scattering the judges, some for a beer or a glass of wine next door at Libation. Neider said judges were supposed to wait until after the competition to drink, but everyone returned from the short break in pretty good shape. Enormous Pacifics came dressed as baked potatoes, topped with bacon, bleu cheese butter and potato chips, and an elaborate model of the ruins of Atlantis circled a clutch of raw oysters hidden under a quail egg, sea urchin, at least three kinds of fish eggs and flecks of gold leaf. It drew gasps and camera phones. 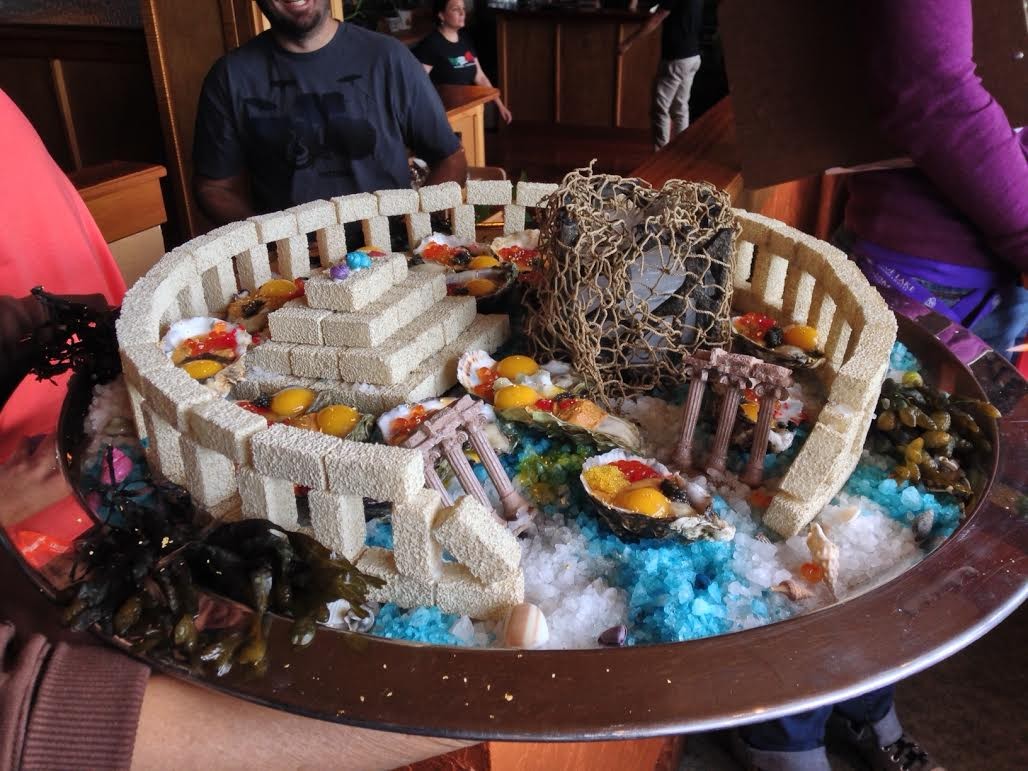 Josh Wiley of Abruzzi called foul on the Atlantis entry (dubbed "Lost Riches Under the Sea"), saying he doubted whether the same dish was being shelled out on the plaza to the commoners. This led to a spirited discussion of the cost per plate. Worse than talk of disqualification was the suspicion of Costco seaweed salad in a non-oyster entry with raw tuna and avocado. Todd Lawson of the Shanty, formerly of Larrupin and Abruzzi, said that while it wasn't bad, it was "like something you'd get at the airport."

The pulled pork slider took a beating, too, with former Arcata mayor Connie Stewart recognizing her favorite barbecue sauce, which she recommends on nearly everything, and calling out, "I'm gonna say the meanest thing I've said all day: I do a better job with his sauce. He should come to my house." 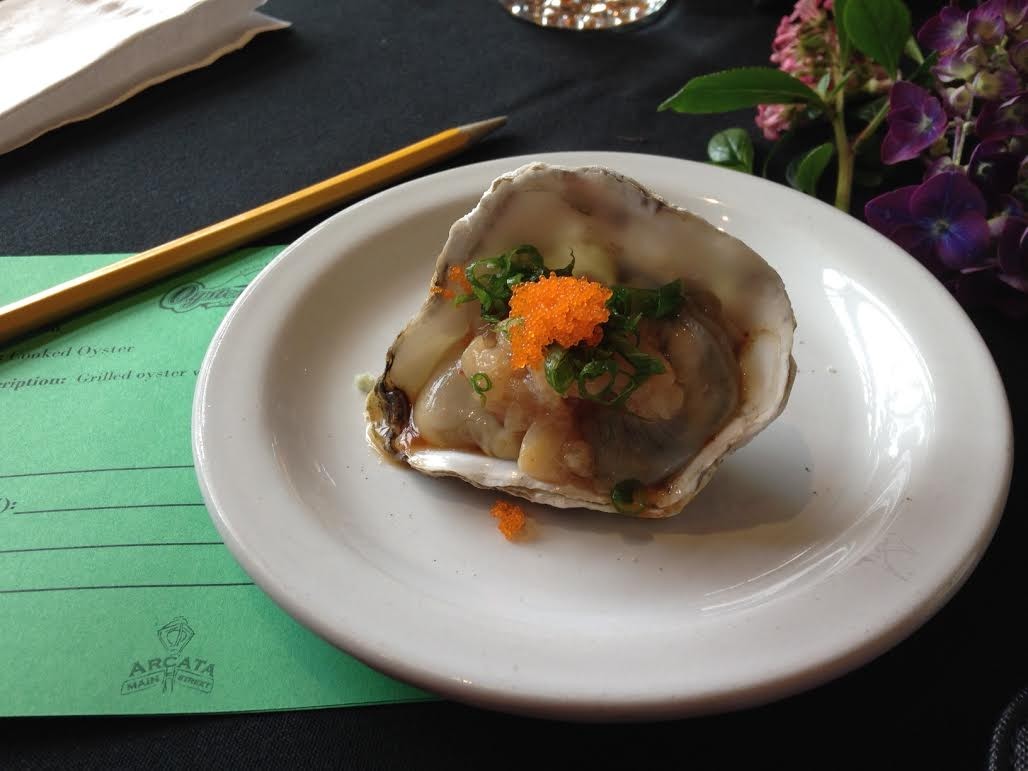 A raw Goose Point oyster topped with hamachi salad, masago and sesame ginger vinagrette won some of the hardest hearts on the panel, eliciting silence, then the scratching of pencils. Hot on its heels was a barbecued oyster blanketed with a warm and creamy cashew-mint butter, lemon and shiso by the same entrant. The risky combination emerged as a close second favorite for the day. Once she had all the ballots, Neider sat down to tally with another organizer — Sushi Spot won both the raw and cooked categories with its hamachi and cashew entries, while Kyoto won best non-oyster with its Korean-style Kobe beef skewers. Their duties finished, the judges headed onto the plaza, where the party was picking up with stilt walkers, giant puppets and people lined up for some fresh oysters — maybe with a little garlic and butter.