The newly opened Greene Lily (307 Second St., Eureka) has trundled away the vinyl chairs and grim lighting of the former Mekong Cafe, swapping in a bright copper ceiling and white padded banquettes. It's quite a makeover. With all the distraction of shiny newness, facing the laminated gleam of an unfamiliar menu could be daunting. Or not — because if someone is back in the kitchen pouring waffle batter over a hot iron with a layer of bacon inside, then get that. The bacon Belgian waffle ($8.95) appears at first as plain as a Kardashian without her contouring make-up, or Channing Tatum in lots of loose clothing. But cutting into the browned exterior is the brunch equivalent of a glasses-off-hair-shaken-out movie transformation. Inside is a layer of brick-red bacon that's been fried to a crisp edge but not crunchy. See, your mother was right and it's what's inside that counts. As long as there's salty pig fat inside. 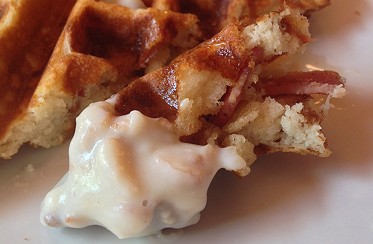 Sure, you could drizzle syrup from your little cup if you're up for sweet and salty. Or you could double down on the savory and order up a side of the bacon gravy ($2.95) that normally comes with the biscuits. The gravy isn't particularly salty, and the barely sweet flavor of the waffle still comes through. Besides, enough of the creamy, bacon-flecked stuff will show up that you can afford to be generous and let companions dip a fry or two. And that's an attractive quality.