Trinidad's reputation as "a drinking town with a fishing problem" means it's also a town that needs a solid recovery breakfast. Lucky the place is small enough that the Trinidad Bay Eatery (607 Parker St.) is only a short stumble away. A plate of fluffy cut-out buttermilk biscuits split and blanketed with white bacon gravy might be enough to steady you ($5.99). If nothing else, the pale expanse will blot out those fuzzy memories and thoughts of the gym. 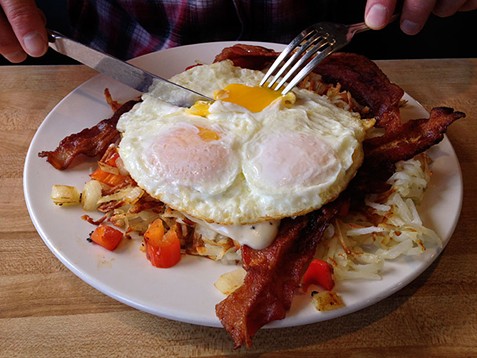 But if you're still puzzling over what to do with the drunken sailor, the Sailor's Mess might be called for ($11.99). Order it and your sympathetic server will bring you a plate filled to the edges with hash browns and topped with onions and peppers (vegetables!), a trio of eggs and three strips of bacon. Hidden beneath those eggs is a ladleful of that bacon gravy, which is a fine idea. The potatoes are all you want from hash browns — a flattened haystack that's crisp on the surface and steamy and soft within. And, wonder of wonders, it's by no means a greasy affair but an actual meal to fortify you and help you regain your sea legs.

If you're there when the cinnamon rolls come out of the oven, get one ($2.99). The spiral of pastry — taking up the table like a coiled fire hose — is doused with warm icing just before serving. The sugar melting into the simple dough is comforting rather than decadent to pull apart and nibble with black coffee — just the thing you need.