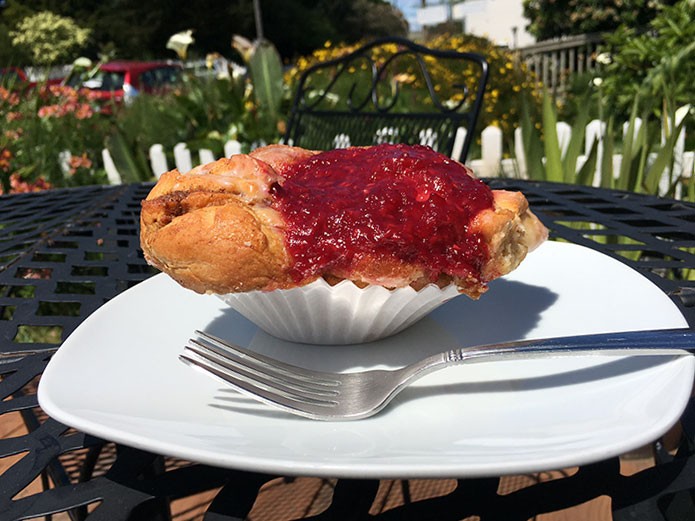 Let's not pretend names don't matter. This week Ferndale's favorite foodie son Guy Fieri revealed that his trademark Donkey Sauce — principal export of Flavortown — is just aioli. It's hard to know whether we should feel duped or just relieved on behalf of donkeys. And did aioli really need rebranding? Naming is a tricky business, the pitfalls of which include over-hyping and forced cheekiness. (See every cocktail you ordered when you turned 21.)

Humboldt Sweets Bakery and Cafe (614 Main Street, Ferndale), where Fieri and his Diners, Drive-Ins and Dives crew have filmed, sells out of its playfully named Knotty Buns ($5) if you don't get there early enough on the weekend. What appears to be a jam-topped brioche is actually a knot (we see what you did there) of cinnamon roll dough scraps — flaky at the edges, streaked with cinnamon and glaze — anchored by a cream cheese center and topped with a dollop of jammy raspberry sauce. It's a heavy kitchen sink of justifiably breakfast-y indulgences in a little paper cupcake liner. Does it live up to the naughty hype of its name? Once you give up on your fork and start pulling at the chunks of cinnamon roll, dabbing and scooping at the berry and cream cheese, your fingers sticky as a toddler's — yes. Yes, it does. Have it on the patio with its sweet backdrop of flowers, brazenly close to the church down the street.