On a Stick: Deep-fried Daredevilry at the Fair 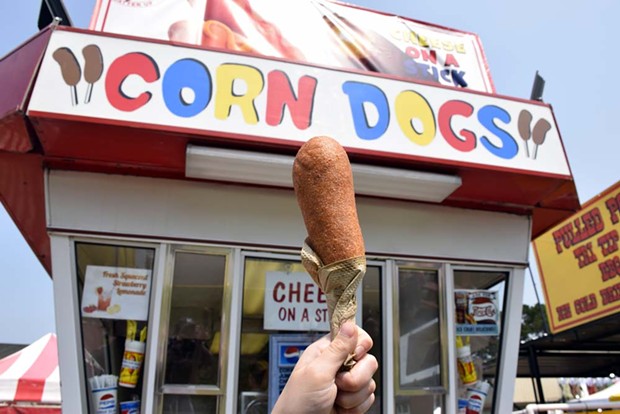 There are plenty of innocent pleasures to be had at the fair, from riding the Ferris wheel with your sweetheart to perusing the prize-winning livestock. But if you're not going to indulge your gastronomic id by eating something deep fried and totally unreasonable, you're not really getting the whole experience. The Humboldt County Fair is in full swing so we returned to the stalls and trailers, strolled past the familiar corn dogs, gator tail nuggets and fried pickles we rated a few years back to sample a few items we hadn't already investigated. Here are three contenders to balance out the wholesomeness of your day at the fairgrounds and add another layer of drama to your turn on the Typhoon.

Giant Kurly Fries: This $8 shoebox-sized knot of skins-on, spiraled fries is made with tools that look better suited for a woodworking shop than a kitchen. Potatoes are spun and stripped into ribbons of starch by a lathe. Stuffed into a fry basket, they're plunged into bubbling oil until crispy  and passed to you through a window by a smiling teen who knows you have no shot in hell of finishing them. Season them as you like — making it rain with a cardboard box of salt with holes punched in the top or pumping ketchup wherever you can fit it — but accept that unless you are sharing with a hungry group, you won't make it down to the paper tray where all those salt crystals have sifted. Well, maybe, but at what cost? 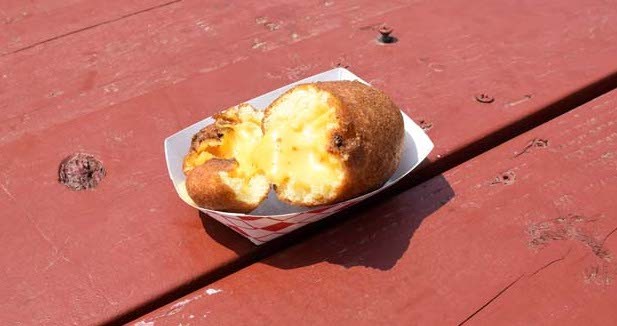 Cheese on a Stick: At first glance, it looks like its similarly priced sibling the corn dog: a pebbly cylinder of deep-fried corn bread batter with a wooden stick jabbed in one end. But inside this evil twin is a block of American cheese rendered molten in the fryer to yield the nihilist carney version of a grilled cheese sandwich ($5). The young woman at the cash register will warn you it's "very, very hot" and offer the pro-tip of removing the wooden stick to "let it vent." It's OK to be afraid. After a couple minutes of venting, the sweet, crusty cornbread breaks open to a golden yellow center of creamy, processed cheese magma. Salty, sweet, greasy, crunchy and artificially creamy. There are only two kinds of people in this world — you will either recoil or wish for tomato soup. 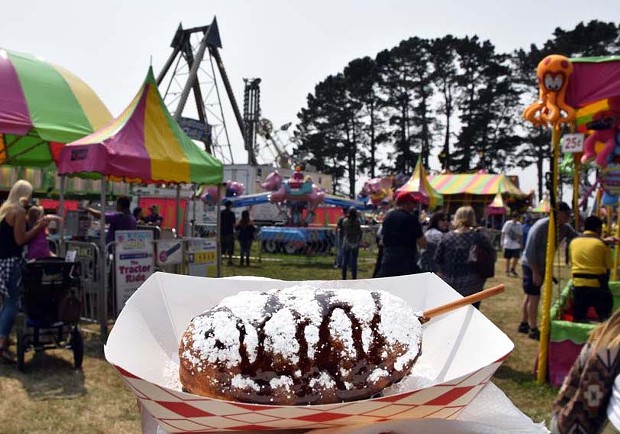 Fried Twinkie: The fact that this $5 hybrid of childhood nostalgia and poor adult decisions is for sale at the same stand as the deep fried Snicker's bar that nearly did us in a couple years back is a very bright red flag. The funnel cake batter-dipped Twinkie is roughly the shape of a harbor seal and nearly the weight of one. It's blanketed by a snowfall of powdered sugar and criss-crossed with chocolate syrup — you can order it without but that's hardly the path of moderation. Crack open the crust and the yellow snack cake with the alarmingly long shelf life is revealed. Whither the creamy filling? Oh, it's in there, just transformed by the heat of the fryer to a translucent, sugary goo that's, holy hell, somehow exponentially sweeter than in its original fluffy form. One bite in and any plans you had to ride the Zipper or ever look your dentist in the eye again are dust. Powdery, sugary dust.