After months and years of wishing, manifesting, prayer and vision boards failed to yield a deli within medium-heel walking distance of the Journal offices, I was about to move on to witchcraft. Then Delish on 5th (440 F St.) opened up in Old Town with its case full of cured meats and cheeses, for which I'm deeply grateful, as spellwork looks like a steep learning curve.

The setup — fancy kitchen shop on one side, fancy baked goods and sandwiches on the other — is a little more bespoke than I was going for but, in fairness, I did only skim The Secret. The hot pastrami sandwich ($11), for example, comes on a crusty, Dijon-swiped hunk of house baked ciabatta and grilled until the Swiss cheese bubbles down over the sides. The meat itself has some smoke and pepper to it, but its fall-apart texture and edge-browned fat is more akin to a roasted brisket than what you'd normally order on rye or in a Rueben. This is not in any way a bad thing. Likewise the handful of tart giardiniera, with its pickled carrots, cauliflower and green beans in place of the usual dill spear.

The ciabatta shows up again panini-pressed around the Muffuletta ($11), rather than the big, soft, round Italian namesake loaf the traditional New Orleans sandwich is made on. It is, however, generously layered with salami, ham, provolone, tangy olive tapenade and Dijon, which you might ask to go easy on if you're not a fan of strong mustard. The giardiniera stays on the side and the mortadella stays on the bench, but, departures from the standard recipe aside, it's a meaty joy worth the napkins you'll need. 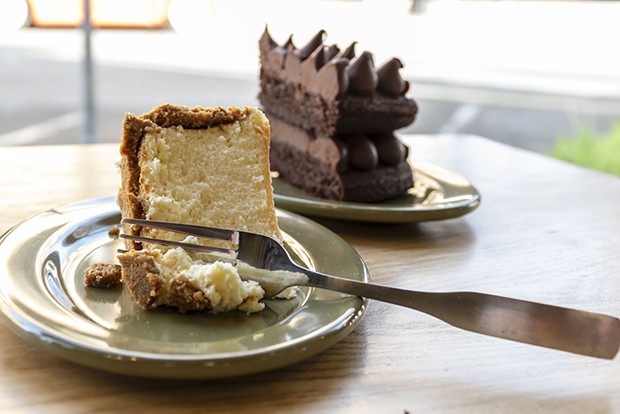 The sea salted chocolate chip cookies are marvelous but if you've got room, invest in a hefty wedge of cheesecake ($4.25). A pinky-thick graham cracker crust cradles the fluffy, creamy filling — listen as your fork makes its way through to the plate and fully appreciate the experience.