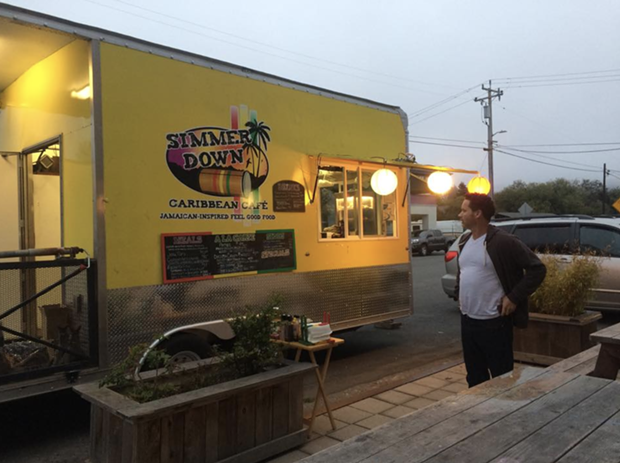 The yellow Simmer Down Caribbean Cafe truck that was a fixture in the Pacific Outfitters parking lot has shut down. Owner Patrick Gaskins, who started the business in May of 2015, places the blame squarely on the budget-tightening effects of legalization.

"The last harvest season of 2016 right after Prop 64 passed, I slowed down," says Gaskins. "That harvest season I was down 45 percent or more. You could tell people were scared to spend money. ... It came back a little bit but basically last year I was operating at 3o percent lower than I planned." He says he knows his customer base and much of it is drawn from the cannabis industry, which is now faced with the cost of permitting, taxes and falling prices. Even after reducing his Arcata rent and utilities from $1,000 to $750 per month, Gaskins was still struggling and so tried staking out a spot in Garberville. Eventually the stream of customers dwindled there, too.


"I just decided I'd rather spend more time with my family than working 12-hour days just to pay the bills (for the truck)," he says. Now he's focusing on Gaskins Family Foods, marketing some popular Simmer Down items like the Burn Babylon hot sauce and chickpea cashew Nattyburgers to retail outfits and restaurants. "That's actually going well," he says. "People may not be eating out as much but they're still going shopping."

Last month Masaki's Mongolian Grill went cold, too. The operation, located at 475 I St., and all its equipment are listed for sale on the Mikki Moves Real Estate website for $95,000. Owner Jeni Masaki opened the restaurant in 2013 with her husband and former chef Eric Masaki, who's since moved on to become a Humboldt County Sheriff's deputy.

On her own, Jeni Masaki says being stretched between three restaurants — they also own Masaki's Kyoto Japanese Restaurant in Eureka and Central Sandwich in McKinleyville — became too much. That and a drop in sales left her wanting out. "Our sales went down by 30 to 40 percent in the last two years," she says, adding that she believes the slowdown came with the legalization of marijuana and the pricey road to compliance she says her customers have complained about.

Masaki's Kyoto Japanese Restaurant has also been for sale for more than a year, listed now on the same real estate site for $115,000. Masaki says Kyoto, too, has felt the economic squeeze. "Not 45 percent," she says, "but we are definitely down from what we used to be."