'Not Like it Used to Be': Why Mazzoti's Eureka Shut Down 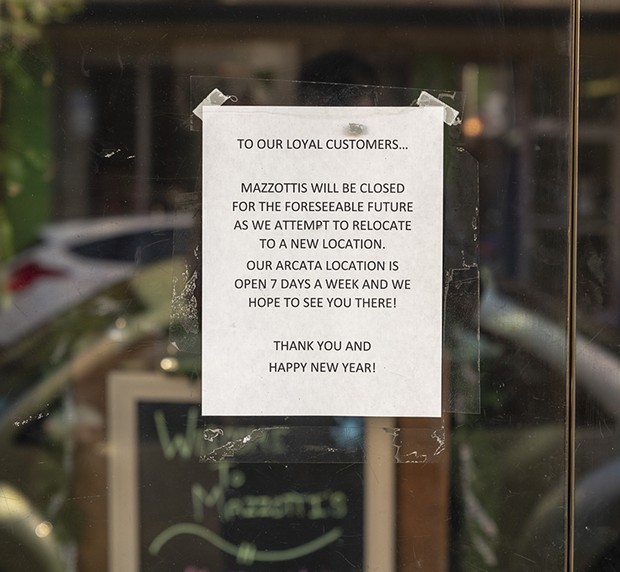 Peer through the darkened windows of Mazzotti’s in Old Town and you’ll see the chairs have been upside down on the tables long enough to gather yellowed leaves from the hanging plants. Eventually the furniture will come out and the sign will go down, but Mazzotti’s isn’t coming back — at least not here and not the same as it was.

A sign on the glass door of the 42-year-old restaurant previously announced a reopening date but changed to complete closure. Over the phone, Joe Mazzotti, who owns the restaurant with his wife, Jean, explained, “We were debating what we were gonna do. We always close that store on the 22nd, depending on where the day falls, for the rest of the December.” There just isn’t profit to be made between the holidays, he said. But during the annual break, he and Jean considered the impending end of their lease and the state of the business, finally deciding to shut it down for good. “It’s just not attracting new customers. And the economy in Eureka is a little iffy right now.”

Joe Mazzotti was only 7 years old when the restaurant opened in 1976. “It was just a pizza and pasta place,” he said, but it grew in popularity, menu and space, punching through wall after wall. He and Jean took over the business in 1994. “We grew into those spaces. We got so busy and the economy was going really well,” so they expanded into Arcata. After selling the Eureka restaurant in 2008, the couple bought it back in 2015, remodeling the kitchen and tidying up the dining room.

“It was never really that bad but it never really performed like it used to perform,” Mazzotti says. The old customers still filled up tables but the restaurant wasn’t doing as well as they’d hoped. And, he said, “There was always some kind of mechanical issue,” be it plumbing, electricity or equipment. Making the Eureka spot run as smoothly as Arcata would take some renovation, partly because the expansion had been done piecemeal rather than with a unified design plan. Given what he sees as a decline in Eureka’s economy, he and his wife were reluctant to invest further in improving the place.

“When Mazzotti’s [Eureka] was in its heyday, logging was still going, you had banks that were full, there was a saturation of blue-collar workers in Eureka, the fishing industry was better,” he said. Mazzotti topped the list with the dropping price of marijuana and the fledgling legal market still finding its feet. “It’s not like it used to be. So with the economy in transition right now, I saw the writing on the wall. I’m not going to lose my ass on this,” he said. “You have 20 employees. You have to be confident you’ll make a profit.”

“Not only that,” Mazzotti said, “but the place has just run its course,” and the mom-and-pop style doesn’t appeal to diners the way it once did. “People walk in they want a lounge or a full bar … it’s just not what people are expecting in terms of restaurants these days.” He sees more competition among restaurants in Eureka serving families from kids to grandparents, too, while Mazzotti’s on the Plaza and Plaza Grill are the only contenders in Arcata for what he calls “the broad spectrum, full-service steak and seafood places.”

Still, Mazzotti wants to come back to Eureka. “I want to take a little time, put my finger in the air,” he said, adding that he might take over an empty space or move into a newly developed property. If and when that day comes, he said it won’t be the same. Instead it might be a higher-end place with a full bar like the one in Arcata, he said, and a different menu.

For now, Mazzotti said he’s in no hurry. “It’ll all work out.”