All the Pretty Oysters 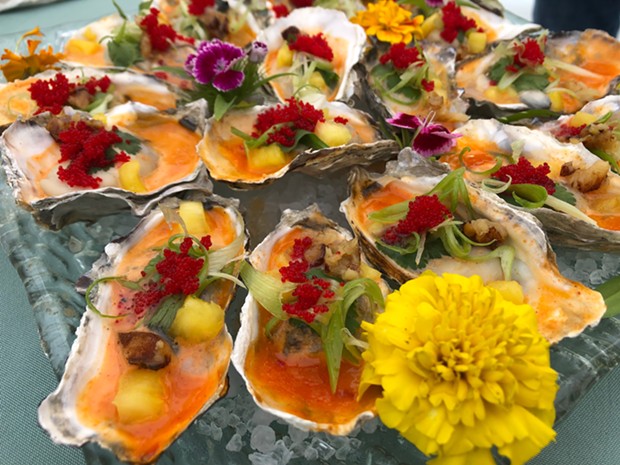 The drama. From the local beer debacle to the math error in a bacteria count that led health officials to temporarily close Humboldt Bay's oyster fisheries two days before the festival, the lead-up to the 2019 Arcata Bay Oyster Festival was a lot. Head Oystress Sydney Morrone said she hadn't heard of any oysters actually dumped in the pre-festival panic but this was a close enough call for everyone. In fact, before the oysters were tested and declared safe on Friday, organizers were already working on shipping in alternate oysters from out of town. Happily, it wasn't necessary and the oysters on the plaza — and up for judging — were homegrown.

This year the 14 judges, myself included, were glamping out in a tent where SeaQuake beer and Cook's sparkling wine — once forbidden during judging — flowed freely as "oystresses" glided in and out with paper trays and platters of oysters. The number of entries is still shrinking but the competition was still stiff. (See the slideshow below for a full perusal of the contestants.)

The competition for Best Raw Oyster came down to a mere four entries. Notable was the total absence of shooters — are shooters over? Discuss. In any case, first-timers Fregoso's Comida Mexicana came away victorious with an "al pastor" marinated Kumamoto with grilled pineapple salsa. Well, sort of first-timers — much of the same team was in place at Savory when it won in 2017. Best Cooked Oyster was a broader field with eight contenders. The entries ran the gamut from thick, bubbling sauces to fruity vinaigrettes and yes, a little butter and lemon. In the end, Blue Lake Casino and Hotel repeated its 2018 win, this time with a sweet and spicy barbecue sauce, a little miso, wasabi and dancing bonito flakes.

Perhaps because it doesn't carry the same cachet as the oyster prizes, Best Non-Oyster only found three entrants. But the winner was a standout. Again, Blue Lake Casino and Hotel scored with a fried wonton "tostada" with spicy tuna, jalapeño, avocado, aioli and eel sauce. Best in Show once again went to the high-scoring Sushi Spot, which won over palates with a raw Goose Point in sesame-lime vinaigrette with peppered avocado puree, cilantro oil, crushed Himalayan salt, lime zest and sambal, as well as its cooked oyster in creamy garlic-kimchee sauce with pineapple, cilantro, sesame, scallion, seven-spice and habanero-infused masago. So, shooters are out, pineapple and jalapeño is in. 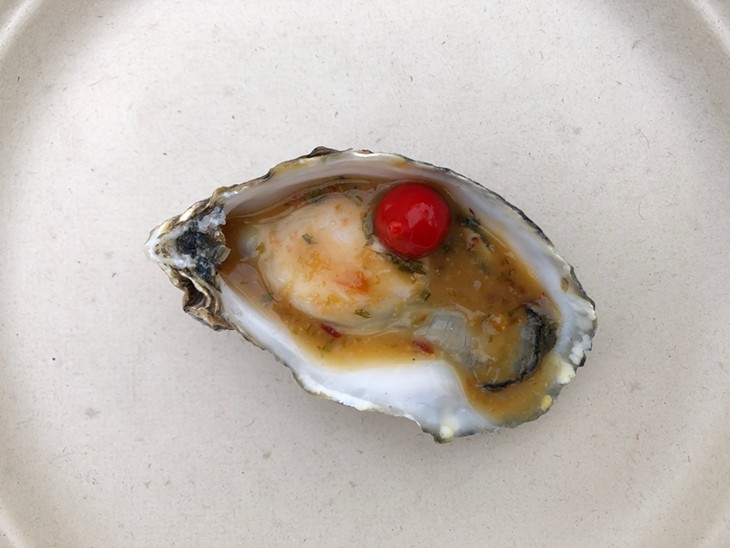