September 22, 2020
comment
If the Booth Brewing was your gateway to Korean beer aesthetics, you'll be pleased to know Dokkaebier has made its way into Humboldt stores. The independent beer company's CEO Youngwon Lee, formerly of the Booth's Humboldt operation, launched the Bay Area-brewed beer at San Francisco Beer Week in February on the cusp of shelter in place. His head brewer is fellow Booth alumnus Aaron Weshnak, who cooks up the recipes — featuring flavors like galangal, bamboo leaf and lemongrass — here in Humboldt. 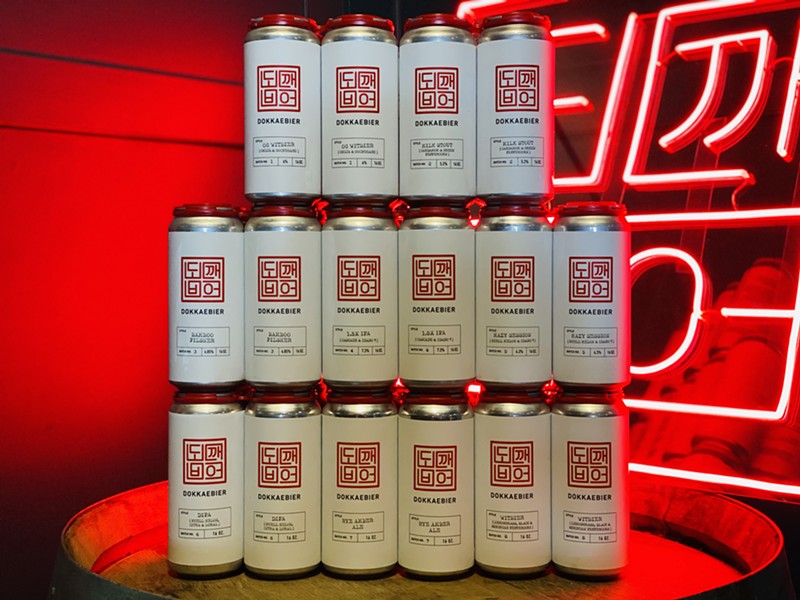 Lee, who came to Humboldt from South Korea in 2017 (though he grew up in Guam and New Jersey), is based in Oakland and, unable to find the right facility in our county, works with a brewery there to produce what Weshnak cooks up in his kitchen. “I trust him with the recipes," says Lee. "And we brainstorm about what we want to make.” Under normal circumstances, they might be traveling more to collaborate but shelter in place rules that out. Lee says it's a good thing they're comfortable working remotely. “If I never worked with him this wouldn't have been possible.”

As to the Asian-inspired flavors, “The beer market is very IPA dominant," says Lee, who wanted to make something unique. Weshnak stepped up to the challenge.

Weshnak went through University of California at Davis' master brewing program, delving into everything from thermodynamics to packaging engineering, interned at Lagunitas and worked at Lost Coast Brewery and Russian River Brewing Co. before brewing for the Booth. “Certain flavors I’m not experienced with," says Weshnak. So he plays around with them, making infusions and mixing them with beer, experimenting with combinations and intensity. Some Dokkaebier varieties in the white cans are early batches, slightly experimental flavors that may change a bit the next time around.

Some of the flavors Weshnak is most excited about are the citra hazy session IPA, and the peach and pomegranate 1.5 IPA. Still, he says "The witbiers are some of my favorites. I feel like I've gone through the whole [beer lover] progression" with a deep dive into IPAs. Now he's looking for new flavors and it sounds like he's finding them. The current lineup includes an LP witbier with lemongrass and black and Szechuan peppercorns. There's a bamboo pilsner and a green peppercorn and cardamom milk stout.

Dokkaebier has eight varieties in stores now in the Bay Area and at both North Coast Co-ops and the Eureka and McKinleyville branches of Eureka Natural Foods. Asked if a pandemic is a tough time to launch a line of craft beer, Weshnak recalls what a former boss told him: “When times are good, people drink. When they’re bad, people drink.” And after months of shelter in place, a taste of something new sounds good.