Food Trucks and World Central Kitchen to the Rescue

December 24, 2022
3 comments
Three-year-old Leilani Valverde held a partly unwrapped burrito sideways in both hands, took a bite out of the middle and came up smiling. According to her father, Christian Valverde, who brought her with him to the Rio Dell fire department Thursday morning, it was her first hot meal in two days, ever since a 6.4 magnitude earthquake near Ferndale knocked out power and water to their home. 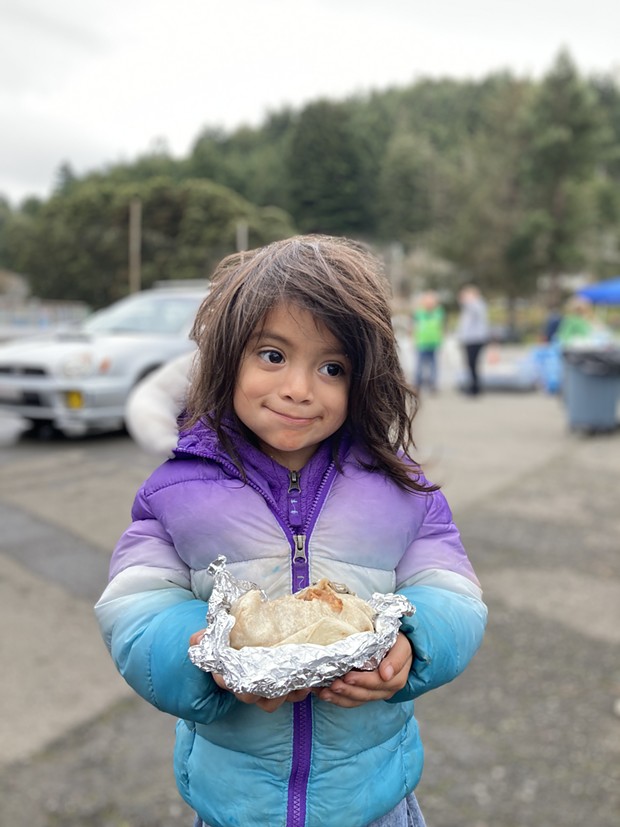 Following the Dec. 20 temblor, chef José Andréas’ international relief organization World Central Kitchen mobilized quickly to feed residents without access to food, water and other utilities. Because power and water were up and running in other parts of the county, the nonprofit, which responds to humanitarian disasters all over the world, did not need to set up whole mobile kitchens. Instead, it reached out to deploy a local resource that was ready to help: food trucks. By the end of the day Dec. 21, they’d served an estimated 1,700 meals.

World Central Kitchen Director of Emergency Response Sam Bloch said work began as soon as he and his coworkers in Oakland woke up to the news. “Every disaster and every community’s needs are different, so we get boots on the ground and talk to the people and design the right time place and way to get people a meal.” The loss of power and water in Rio Dell and Fortuna led them to set up hot meal stations in both towns, one in Rohner Park by the Red Cross shelter and another in Rio Dell’s fire station, which has relocated to Monument Middle School. “We look at people’s ability to cook themselves a proper meal,” like the availability of water electricity, stores and gas, Bloch said. “It takes quite a bit to cook yourself a meal at home.”

Bloch met with Rio Dell Mayor Debra Garnes, fire station and Red Cross staff, while his colleague Pragnya Alekal took on the Fortuna end of things. He also reached out to food truck owners, since they are already set up to roll into town with prepped ingredients, independent power and water. “If there are local businesses that are there and able to do it, and can use the business, it makes sense.”

A call to Loco Fish Co.’s Jayme Knight, who was fresh out of inventory, led him to Knight’s neighbor, David Velasco, owner of the Manzanilla food truck. From there, Velasco sent word out among his mobile food connections. “I called my friends from Humboldt Bay Burgers, Fógon Costeño, Taqueria Martinez and Oaxaca Grill,” and a few others to see if they could provide a few hundred burritos each, said Velasco. Most asked if he was kidding, he said with a laugh. “We got a lot of people together, so it was great.”

Enrique Buenrostro of Fógon Costeño, Miguel Martinez of Taqueria Martinez, Osmando and Omar Hernandez of Los Giles Taqueria, Oaxaca Grill and Leobardo Rivera of Humboldt Bay Burgers all responded to the call. Gaby Long of Taste of Bim connected with the organization through Humboldt Made, and Jorgelina and Gino Granados of Pupuseria San Miguel also took up the challenge.

From there, Bloch worked out a flat per-meal rate to pay the businesses. “We’re culinary folks and we love local businesses … [and so we] pay per meal.” For many of the restaurants and mobile businesses World Central Kitchen works with, the relief efforts mean cooking more than they’ve ever cooked in a single day.

Working in Buenrostro’s truck, which was lighter than the Manzanilla rig, Velasco and Buenrostro cranked out an estimated 1,800 working from 6 a.m. to 9 p.m. Dec. 21, 22 and 23.

Velasco said it looks like they’ll make a small profit but that wasn’t the point for him. “We’re more excited about feeding all those meals than how much we’re making.” In fact, he said he agreed to work with Bloch before he knew what the organization was paying. “More amazing for me was the World Central Kitchen was putting all this together,” said Velasco. “I was really happy to work with them. It was a really nice experience to see so many people happy.”

A line of cars wrapped around the Rio Dell fire station, stopping to pick up shelf-stable food, cleaning supplies and cases of bottled water. At the end of the lot, Rosio Lopez, Omar and Osmando Hernandez were sending burritos and tacos through the window of the Los Giles Taqueria truck, from which volunteers shuttled them to people in cars and those waiting on foot. Next door in the red Fógon Costeño truck, Velasco and Buenrostro were banging out pork, chicken, beef and bean burritos wrapped in foil.

Long, who’s been serving comfort foods like curried chicken and beef short ribs from her Taste of Bim truck in Fortuna and Rio Dell, said, “It’s been definitely rewarding just experiencing people being thankful. I mean it’s been a lot of work, for sure, but good work.” Hearing about the hardships people are going through, displaced from their homes, sometimes crammed together in temporary quarters, she felt compelled to make Christmas Eve dinner special. Tonight, the truck will serve roast ham or vegan vegetable pasta for dinner. While she’s moved, Long isn’t surprised to see Humboldt folks — volunteers, first responders, neighbors and food restaurant and food truck operators — coming together in the wake of disaster. “That’s who we are."

When a volunteer asked one driver what kind of burritos she wanted for her family, she waved a hand and answered, “We’re not picky. We’re just hungry.” Accepting the swinging bag of burritos, she added, “Thank you for all you’re doing.”

Garnes, decked out in a Santa hat, was waiting on 100 burritos from the Taqueria Martinez truck to hand out to seniors in Rio Dell. “A lot of people can get here but there’s so many people that can’t,” she said. She brought the team she delivered food during COVID lockdown with back together right after the earthquake to feed seniors in their homes again with food from the World Central Kitchen-sponsored trucks. “I’ve been really impressed with everybody coming together and the response.”

According to Bloch, there’s no set budget for the operations in Rio Dell and Fortuna. It will go on as long as it’s needed. Humboldt County is the 58th setup in four and a half years across 24 countries. Quoting founder Andrés, he said, “World Central Kitchen is the largest organization in the world because every restaurant, farmer and food truck is part of it, even if they don’t know we exist yet.”

Jennifer Fumiko Cahill (she/her) is the arts and features editor at the Journal. Reach her at (707) 442-1400, extension 320, or jennifer@northcoastjournal.com. Follow her Follow her on Instagram @JFumikoCahill and on Mastodon @jenniferfumikocahill@mastodon.online.