Meggan Anderson and the window-hurt pigeon

The PETA -- People for the Ethical Treatment of Animals -- activists who staged a noontime protest today on the F Street Plaza in Eureka arrived with friendly optimism plus a pile of fake green ivy, a curvy near-naked woman painted like a snake and a quiet leaflet-and-sign plea (no megaphone antics here) to stamp out the vile and mostly foreign trade in the skins of exotic animals -- like crocodiles, alligators, snakes and lizards and such, some of whose skins are torn right from the living flesh after the poor things have been paraded on a death march to their destiny, say the activists, in order to make flashy fashion accoutrements for you and me.

They left sadly, less than an hour later, bearing with them a near-death more homely creature in a little shoebox.

The pigeon had been contentedly cooing and pecking about underfoot with the other resident pigeons, who daily tend the cobbles down there relieving children of the corn kernels brought as bait for entertainment. But about three quarters of the way through the PETA protest -- which was peaceful, by the way, and drew a small but supportive trickle of onlookers -- the whole flock swooped into the air and arced around the fountain and then -- "smack!" -- one of them flew right into the glass door of Shoe Envy, which faces the Plaza.

The PETA activists rushed to the pigeon's aid. Inside Shoe Envy, clerk Katrina Mosler grabbed an empty shoe box and some paper towels -- can't leave the bird lying there in front of the door -- and they placed the pigeon gently inside it. Moments later, the snake lady -- Meggan Anderson, an actress and model from Los Angeles who owns cockatiels, so she knows a bit about birds -- sat wrapped in a sweater in the group's van cradling the box with the pigeon in it. She placed a finger on the bird's breast. "I think I can feel it breathing." The bird's eyes were shuttered to slits, its feet edging skyward -- hard to tell its state of being. The group planned to call a vet.

Before they left, Jena Hunt said Eureka was the activists' last stop on their journey to spread the word about the cruel trade in exotic skins (their fliers spoke of fashion-driven animal abuse here on the homefront, as well). Hunt, also an actress, is the campaign coordinator for PETA's international grassroots campaigns -- she's also the petite, fetching person who peeved local media boys earlier today by leading them to believe she would be the naked snake lady. Boys, get over it: There was nothing wrong with Ms. Anderson's portrayal of a sexy beleaguered snake. Take it from the fellas in the beat-up red car who made two passes around the Plaza shouting things like, "That's sexy awesome!" 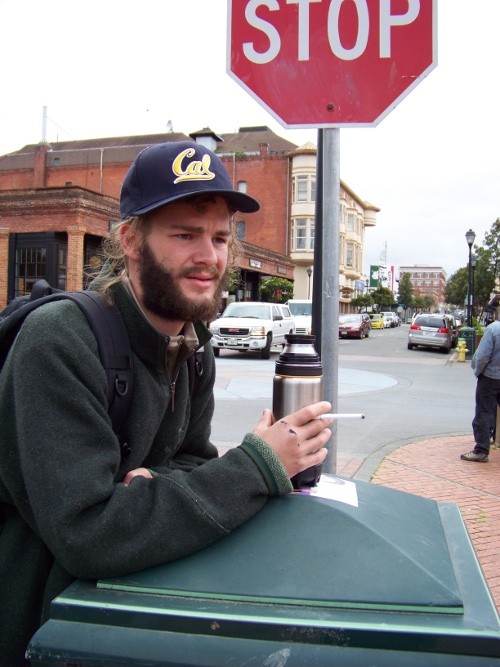 Scott Thompson, of Eureka, said the PETA protest was A-OK with him, although he fully embraces the hunter instinct inside him. "I would wear fur if that was, like, where I was at in my life," he said. "If it was necessary for my survival. But I would never do it for vanity, ever. And I have enough cotton and wool -- this is wool [he fingered his lovely Arcteryx sweater] -- to keep me warm. I don't need to hunt."

Russell Wade, talking a bit stiffly because of a broken jaw that's slowly healing (he's tried in vain to get medical help, he says], was all for PETA's cause. But, he wanted to know, why doesn't PETA focus on domestic animal abuse instead of galavanting off on foreign causes? Jena Hunt, international campaign coordinator for PETA, told him one of their staple issues is, in fact, going after domestic factory fur farms, but also that they just want Americans to stop buying the foreign stuff. Mark Sterling, of Eureka, and his companion dog Jazz -- half fox terrier, half Jack Russell, whole cuteness -- chat it up with PETA's Jena Hunt. Sterling was actually lured to Old Town by those Los Bagel's ads hawking cheapskate bagels and coffee -- good call! -- and saw the PETA folks prepping for their protest there.