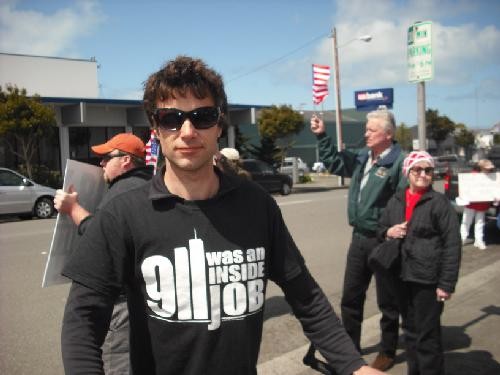 It's a sunny, but blustery April 15th in Humboldt County. Somewhere between 200-300 protesters have gathered in front of the Eureka Courthouse to join in the Nationwide Tax Day Tea Party. Today, the Board of Directors of the Humboldt Taxpayers League has invited people in our community to come out on Tax Day '09 and let elected representatives know that folks are "tired of being used as ... personal Automatic Transaction Machines (ATM)."

The protest is one of hundreds taking place across the nation today. Our Eureka version was quite tame, however, in comparison to reports of people hurling suspiciously packaged tea bags at the White House back in Washington D.C. No, our gathering was a family affair, with the make-up of the crowd leaning more towards retirees than violent young revolutionaries. The elderly crowd gathered on the lawn and sidewalk along 5th St. waving their American flags and homemade signs just demanding some financial security, for goodness sake.

Click through for more story, photos and a video report from Old Glory Radio! 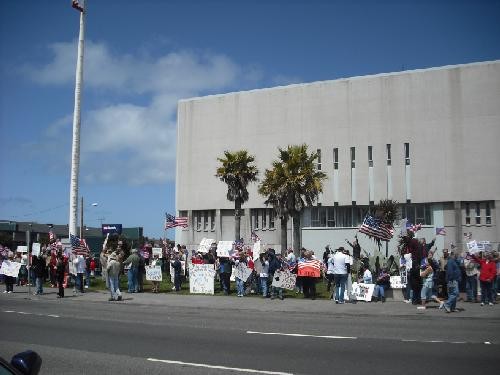 The crowd's enthusiasm was high, and the response from passers-by in vehicles was quite noisy. Every few minutes, the bass of a semi truck's horn reverberated through the group, accompanied by more high-pitched horns of passenger vehicles tooting their support. A round woman with an American flag apron handed out cupcakes, shouting, "We wake up early and bake cupcakes! That's what conservatives do. And we pick up after ourselves and pay for our own stuff too!"

A janky sound system was set up for people to get on the mic and rally the crowd. No one really stepped up though, save for an older fella talking about putting tea bags on his head and another guy giving shout-outs to Roger Rodoni and Thomas Jefferson. The sound system was predominately used to pump out some country music and classic patriotic jams ... Who needs a crowd leader anyway when you've got a bunch of people pissed off about their finances?

Most of the older looking folk were quite riled up about the current state of the economy. Riled up enough to get out here on this street corner and tell the town what's up. Mary Ruth Rheinschild, who traveled down from Crescent City to join today's tea party, declared, "People who think this is ridiculous and that we shouldn't be doing this should pay my taxes." She's bummed about the state of her retirement and the fact her money is still being taken way by those blasted govies. 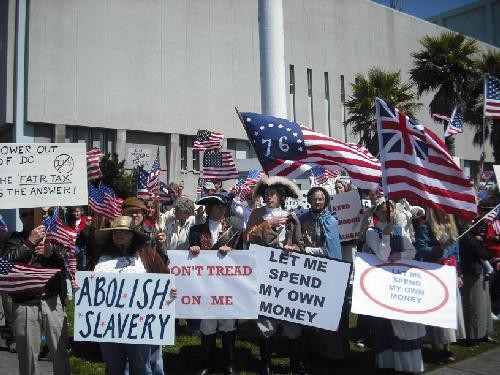 Melissa O'Hanen, a very pleasant Republican mother of five with a youngster in tow, was there "stand against the nation's deficit." She proudly shared that one of the four teens dressed up in colonial attire standing at the corner is one of her sons. The youths are part of a constitutional law class conducted through their private high school. According to her son, a.k.a. Alexander Hamilton, everyone in the class is a Republican, and they are all bummed about the state of our economy.

Another person in the retirement zone, Judy Billingsly, was pissed because according to her, when it comes to retirement, "you plan on what you see in front of you, and then someone just takes it away." Kathleen Duncan, yet another retiree asked in reference to her and her elderly husband, "Who's gonna give us a job? We're in our 80s."

A young man clad in a "911 Was an Inside Job Shirt" was perusing the patriotic showing. When questioned about his political affiliation, Andrew Thompson said, "I am not a Republican, but I agree with 99% of the signs." Andrew thinks that the blame game is a real drawback in the politically charged war on our devastated economy. In other words, don't blame the liberals for the shitstorm we're in right now. (BTW, he was the only non-Republican I managed to find in the crowd.) 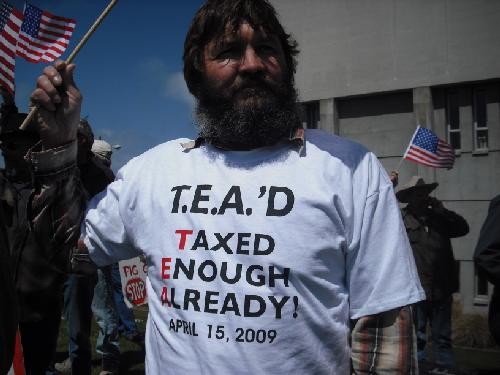 Yes, there were young professionals, little kids and blue collar seeming people to be found amongst the crowd. Copies of the Declaration of Independence, Republic Magazine and John Birch Society handouts were up for grabs. All in all, it was a good turn out for the supposedly lefty leaning Humboldt County. 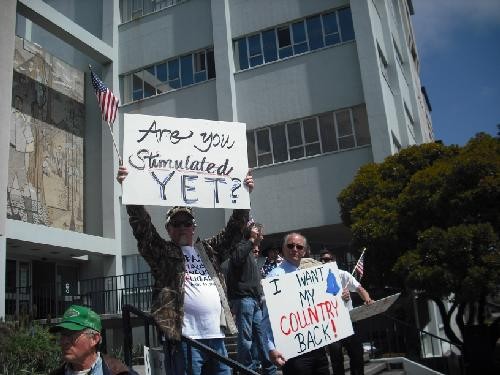 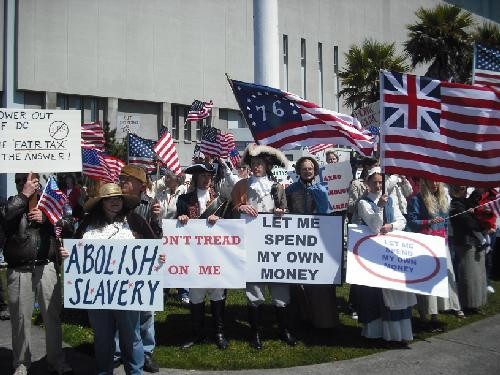 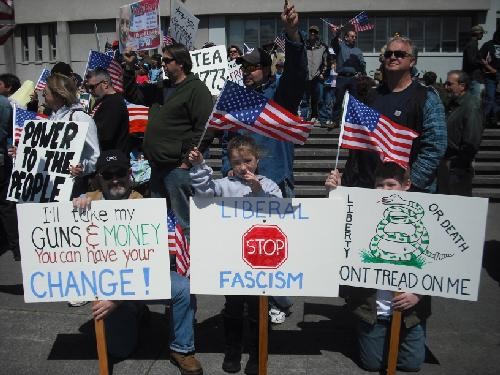