Selling the Marine Life Protection Act to North Coast fishermen -- and official-types -- might turn out to be as tricky as crossing the bar at Humboldt Bay's entrance. Mind ye don't capsize, MLPA Initiative staffers, and become one with the fishes.

OK, nobody was really acting that scary at the workshop last night at the Wharfinger, where MLPA staffers talked with individuals about various aspects of the process that may result in marine protected areas in our region. But resistance to the idea was evident in certain conversations, which invariably started like this:

Skeptical fisherman: "We don't need this act. We already have laws restricting our fishing."

And MLPA staffers were heard saying, repeatedly, that the outcome -- where these marine protected areas end up here on the north coast -- depends on input from local fishermen. But some fishermen seemed skeptical.

Franklin Klopp -- yes, the very man who's got a lake named after him out at Arcata Marsh -- was hanging around outside the workshop talking to Dennis Mayo and Vivian Helliwell, who were pushing a petition to suspend implementation of the MLPA. "These people are sponges," Klopp said, smiling as he nodded his head in the direction of the workshop room. "They take in what you say, act like they're soaking it up -- and then they blow back up again."

Inside, similar grumblings could be overheard in small groups that gathered before info panels. "You give them your information on where you fish, and then that's where they put the marine protected areas," said a suspendered fellow leaning on a pair of ancient wooden crutches.

But not everyone spoke bleakness. Greg Dale, of Coast Seafoods which grows oysters in Humboldt Bay, said he's been watching the MLPA implementation process as it has made its way region by region along the coast.

"I'm fairly neutral," he said. " I think we have to have a little bit of confidence in the process. I think we can work with the process, and maybe we can all benefit. There's no need to be terrified of it. You hear a lot of negatives about it, and you hear a lot of positives -- but it's a tool."

Meanwhile, said Jennifer Savage -- who's working for the Ocean Conservancy to promote the MLPA (and also happens to be one of NCJ's columnists) -- the local conservation community is slowly gathering force to, hopefully, work with the fishermen and local officials in shaping a system of reserves amenable to all.

Ah, but as for those official types: On Monday, a letter expressing concern about the MLPA initiative process was lobbed off to Mike Chrisman, Secretary of the California Natural Resources Agency. It was signed by the counties of Del Norte, Humboldt and Mendocino; the cities of Eureka, Fortuna, Trinidad, Crescent City and Point Arena; the Trinidad Rancheria; the Humboldt Harbor, Recreation and Conservation District, the Crescent City Harbor District and the Noyo Harbor District; and the Shelter Cove Resort Improvement District. 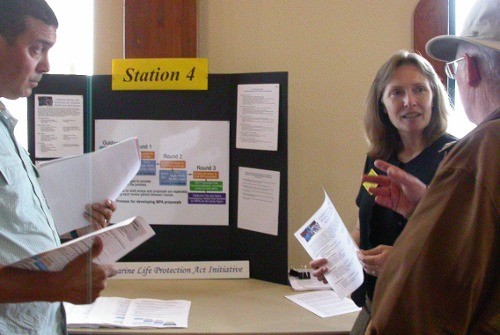