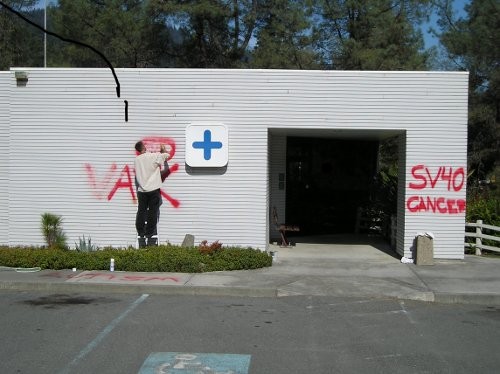 Some time between 6 o'clock last night and early this morning, somebody (or bodies) journeyed between Willow Creek and Burnt Ranch spraying blood-red opposition to vaccinations on school buildings, medical clinics, sidewalks and the k-rails -- concrete barriers -- lining the highway.

Terry Bray, administrative assistant to the principal at Trinity Valley Elementary School, arrived at work at 7:30 this morning to see "SV40" and "VAX waiver" spray painted in red on the school's outside cafeteria wall, and a skull and crossbones spray painted on the school's new office sign in front. She said a bus driver told her he'd noticed the graffiti when he got in at 6:15 a.m. Bray filed a report with the Sheriff's Department, and the school's maintenance person got to work.

"We've already gotten it off, though," she said this morning. "And we repainted the cafeteria, so the kids really didn't even have to see it."

Behind the elementary school, which is on State Highway 96 in Willow Creek, the word "autism" was spray painted on the preschool.

Not far away, at the Willow Creek Community Health Center, on Highway 299, workers arrived at work at 8 a.m. to see "VAX" and a skull with Xs for eyes spray painted on the front of the building, and "SV40" and "autism" spray painted on one side and the back of the building, all in two- to three-foot high letters, said receptionist and medical records clerk Kelly Earls.

"It was a surprise," she said, adding they'd had no hint or threats that this was coming.

The clinic had to hire a painter, and was waiting for him to arrive at about midday today and so had not yet figured the cost of repainting.

Meanwhile, at Six Rivers Medical Center, on Highway 96 in Willow Creek, "cancer," "VAX," "SV40" and a skull were spray painted on the front of the building, and "autism" was painted on the sidewalk in front of it.

"This was a total surprise," said clinic manager Debbie Mitchell.

Burnt Ranch Elementary School, about 15 miles up the road in Trinity County, similarly was vandalized with "VAX," the skull and "VAX waiver." By 5 p.m. today, the school was still working on removing the graffiti, said Superintendent Sarah Supahan. Ironically, today also was the day the school held its first "celebration of character" assembly of the year.

"We emphasize a different character trait each month," Supahan said. "And this month was ‘trustworthiness.' So the teacher in charge was asking, ‘What does it mean to be trustworthy?' And the students were giving different examples. And then one student said, ‘It means not spray painting your school.'"

Supahan said they're stumped as to who did it. "We haven't had complaints," she said. "There's been no parent concern about vaccinating. Our parents are aware we have a waiver."

The Sheriff's Department's Godsey said Deputy Greg Barry, on his way to investigate the vandalism in Burnt Ranch, discovered the spray painted k-rails along the way.

"So obviously whoever did this is mobile," Godsey said.

Bray, at Trinity Valley Elementary School, said she figured the graffiti was done by an adult or adults "because they spelled everything right."

Bray said she Googled "SV40" to find out what it means. "SV40" stands for "Simian Virus 40" and refers to a tumor-causing virus that was found in monkey kidney cells that were used to create the first polio vaccine. The cells' use was eliminated by 1963, according to the SV40 Cancer Foundation, but "it has been alleged that there have been SV40-contaminated batches of oral polio vaccine administered to some children until the end of the 1990's," says the foundation's Web site.

As for the word "autism," Bray said she's aware that some people believe that vaccines can cause autism.

But Bray and others said they didn't know why they'd been targeted. School kids have to get vaccinated for a number of things -- including polio, mumps, measles and rubella -- unless their parents sign a waiver, said Bray. But the school hasn't been pushing the vaccines, she said.

At the Willow Creek Community Health Center, RN Clinic Coordinator Erica Dykehouse said her first thought when she saw the graffiti this morning was that perhaps it had been done by the parent or relative of someone who has been diagnosed with autism.

Dykehouse said there is no known cause of autism. But, she said, about 12 years ago the medical journal The Lancet published an article linking the mumps-measles-rubella vaccine to cases of autism. "But every study that I've read [since then] has shown that the article was based on data that had been altered to show a link between autism and the preservative that was used in vaccinations at the time, called thimerosal," said Dykehouse.

Regardless, thimerosal has been eliminated from most vaccines, she said, and her clinic administers thimerosal-free vaccinations.

Even so, she said she can sympathize with worried parents. "Just looking at it from a parent's perspective, you are responsible for this other being, and every decision you make on their behalf you're wondering, what are the consequences going to be? So, if there's any doubt whether to give your child an immunization, and you're really worried about autism ... and you made that decision [to immunize], and it turned out there was a link, discovered later down the line, I can see where parents would be reluctant to give immunizations. But then when you look at small pox, or whooping cough -- which does go around quite frequently -- or polio, you have to weigh that against the risk of being vaccinated. And there is such a large pocket of children around here who are not vaccinated ... that we don't have insulation [against those preventable diseases]. And then, you have people who travel overseas to areas where the disease is prevalent, and then come back here with the disease and pass it on to children who aren't vaccinated."

She said people who haven't seen what a case of measles or polio or some other preventable and perhaps debilitating disease looks like, they might not have a sense of "how terrible it is" and not understand the risk.

Bray, at Trinity Elementary, said even if you're vehemently anti-vaccines, "this is not the way to get your point across."

"Schools are in financial crisis as we speak and we just really don't have the money or the time to have to deal with something like this," Bray said. "I know our maintenance person has been working on it all morning."

As a side note, the character trait for next month's assembly at Burnt Ranch Elementary School is "Respect."