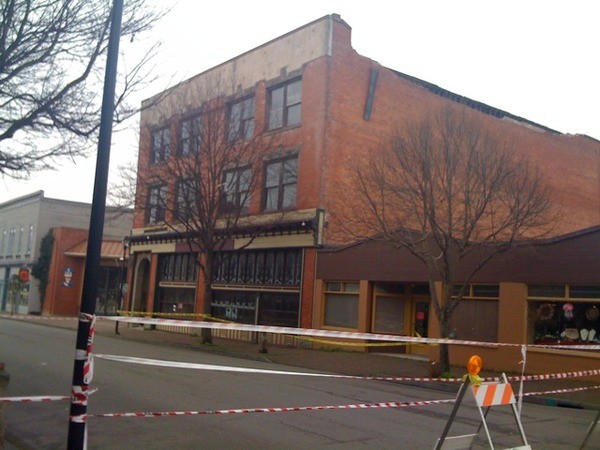 1). The Eureka City Council will hold an emergency meeting tomorrow morning at 11 a.m. to discuss the fate of the former Old Town Bar & Grill/Lazio's building, which sits on 2nd Street between D and E in Eureka. We're being told that the building is extremely unstable, and the City Council is likely to order its demolition ASAP, given the probability of strong aftershocks still to come.

The council will also hear a report on the Lloyd building a couple of blocks away on Fifth Street. That building is still shut down, but we're told the situation over there is not quite as grave. With all the unreinforced masonry in Old Town/Downtown Eureka, it's stunning that these are the only two buildings on the verge right now.

The Lloyd Building is owned by Eureka slumlord Floyd Squires III; one of Rob Arkley's companies currently holds title to the old OTB&G/Lazio's.

2). At the big joint city/county press conference today, Eureka Fire Chief Eric Smith gave a rough estimate of the currently known damage to all Eureka buildings: $12.5 million. However, there's still a lot of ground to cover. Smith said that in the coming weeks, the city will be examining all known at-risk buildings, starting with the old, unreenforced brick ones. Anecdotally, there seem to be a lot of new cracks all around town.

Still, one of the oldest and creakiest -- the Carson Block building at 3rd & F -- has been given the all-clear. So it could be that we have escaped lucky.

3). The County Library suffered water damage -- not the books, fortunately, and is not expected to reopen until Wednesday. Dock B at the Eureka Boat Basin has been shut down pending further evaluation, as has the Bayshore Mall.

4). Eureka Police Chief Garr Nielsen said that his 911 office fielded 700 calls in the four hours following the earthquake; the city's OES department took 300. Still, only one person was admitted to the hospital -- a hip injury at St. Joe's. In all, 27 people sought treatment at St. Joe, mostly for minor contusions or anxiety. A few people went to the ER at Arcata's Mad River hospital. There were no reports of looting anywhere in Eureka, said Chief Nielsen.

One California Street home went off its foundation. The family there were the only people displaced by the quake, though another Floyd Squires apartment building on H Street was briefly evacuated.

5). County Administrative Officer Phillip Smith-Hanes said today that the county will decide over the coming weeks whether it will seek federal or state disaster relief. Rep. Mike Thompson, also in attendance at the presser (along with Assm. Wes Chesbro), said that the head of the Federal Emergency Management Administration has been in constant contact.

In the meantime, Smith-Hanes said that the county and cities would like to hear from anyone who has suffered major damages or losses of property. Here are the numbers: