Did A Dog Predict Arnold's Arrival?

People crowded into the sidestreets leading into the E and Second intersection in Old Town Eureka today, waiting on Gov. Arnold Schwarzenegger to inspect the damages from our 6.5 earthquake last Saturday, and speechify.

Many onlookers brought their dogs, for some reason -- is it some sort of wish for the Gov's blessing upon their beasts? For some fame to rub off on Barky? Anyway, it was a long wait. People joked and talked and played with their pups. Some workers leaned out of a window in the soon-to-be-disappeared Old Town Bar & Grill to watch: 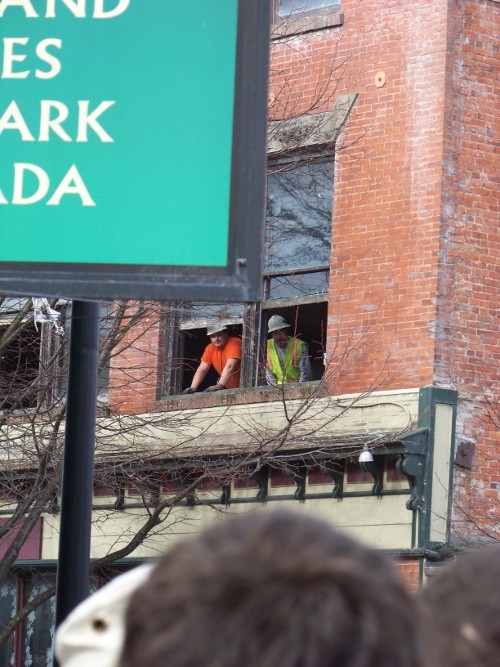 A whole pack of California Conservation Corps members waited, even. A leader, Rachel, said they'd been pulling out the weedy beach grass out on the beach when they got a call and were told to go see the Governor. So they did: 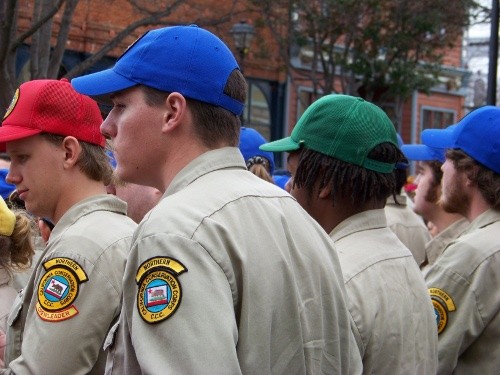 A man came walking speedily down E, headed toward the bay on his daily two-mile constitution, and looked annoyed at the masses blocking his route. "I didn't even know this was happening," he said. He craned his neck for a way around.

"Don't you want to see the Governor?"

"No." He smiled. "He hasn't done anything for me." And he sped off in another direction.

Back among the waiting folk, Chef Bryan Holley from The Sea Grill restaurant broke away from the crowd and dashed away, then came back with a chair and plunked himself down (it would be handy later for prime viewing): 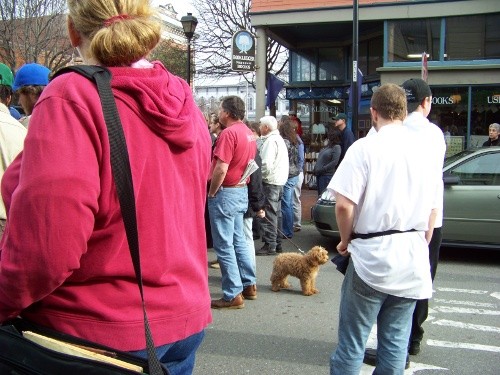 And everyone waited. But wait: Did this dog predict the Governor's exact arrival? 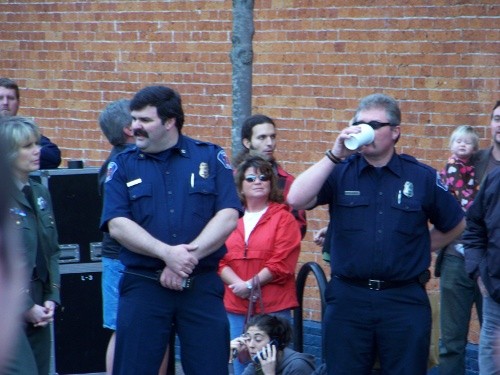 Nah. Arnold came down another street. As he drew near, walking up Second, several guys in the crowd exclaimed: "Oh, he is short!" "He's shorter than me!" "Look how short he is!"

The Gov. and others spoke. But nobody but those right up close could hear what he was saying.