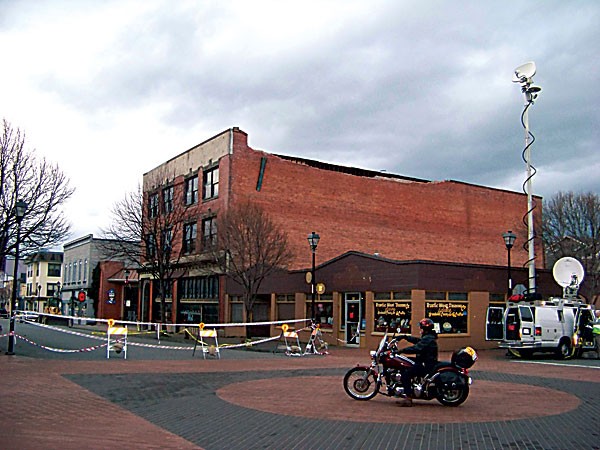 It looks as if the Humboldt County building worst damaged in Jan. 9 earthquake is gonna be saved after all.

Three days after the earthquake, the Eureka City Council met in emergency session to permit the destruction of the former Old Town Bar and Grill building, which sits on Second Street in between D and E. City staff feared that the building was in imminent danger of collapse, especially given the possibility of serious aftershocks in the days following the quake. At the meeting, several citizens spoke fondly of the historic structure, and held out hope for its rescue.

Today, Eureka developer and all-around land man Kurt Kramer told the Journal that he has been in talks to purchase and rehab the building, and expects escrow to close today. Currently, title to the building is held by a branch of Rob Arkley's Security National company, which acquired it in foreclosure.

Kramer told the Journal that he has had engineering teams in the building in the past week, and they have determined that it will be possible to shore up and retrofit the entire structure, as Kramer did with Eureka's Professional Building -- another old brick structure -- several years ago.

Kramer estimated that it will take about two weeks to shore up the damaged building, and another 12-18 months to retrofit it according to modern seismic standards. "We're looking forward to a project that, according to the economy, will either go at the projected pace or a faster pace," he said.

Right now, there's no way to know what will go into the rehabbed structure, Kramer said -- that will follow after a thorough examination of the building's qualities and how they might have to adapt to meet disability access standards and other applicable law. But he said that he was excited to put people back to work in a down economy, and that he expected the building to jibe well with his other Eureka commercial holdings.

“We are very excited that Kramer Properties and Statewide Bank representatives could put together a sale of the building in its current condition that will not only protect the interests of Statewide Bank’s depositors but also allow Kramer Properties the ability to quickly secure and restore this unique and historical part of Eureka’s history” said Randy Gans, Vice President of Security National Properties, which facilitated the negotiation and sale of the building between the parties."