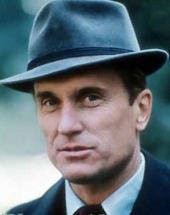 Just to call dibsies on the joke, we will say that Hagen is unrelated to Corleone consigliere Tom Hagen (right).

Press release after the jump.

“The job of the District Attorney is to protect the community and ensure public safety by delivering justice,” said Hagen. “Humboldt County deserves a capable and competent District Attorney and that is what I offer.”

Hagen served as a Deputy District Attorney in Humboldt, Del Norte, Mendocino, and Lake counties for more than eleven years, and is now in private practice. He served as a circuit prosecutor in three of those counties simultaneously, where he established and led a multi-agency task force in each county, investigating and successfully prosecuting public health and safety violations and crimes against the environment.

“I have a track record of delivering effective, even-handed justice, whether prosecuting small-time violators or major multinational corporations,” he explained.

Hagen has worked under seven different District Attorneys and believes that his broad experience will serve him well as Humboldt County DA.

“I know how a well-run DA’s office is supposed to operate,” he said. “The DA must listen carefully to the people, be accountable at all times, and exercise professionalism and sound judgment at every turn.”

Hagen emphasizes a common-sense approach to prosecuting crimes that threaten the safety, security and liberty of people in communities throughout Humboldt County.

“Violent crimes are not being properly addressed and that must change,” he said. “Plea bargains have their appropriate place in the legal system, but the plea must be relevant and proportionate to the crime.  A plea bargain should only be used as a shortcut to a just outcome, not an end-run around it.”

“Victims of crime and their families must be treated with greater respect and compassion,” he added.


Hagen, who received his law degree from Washington University School of Law in St. Louis, has lived in Arcata since 1999 with Janet, his wife of 25 years.  They have two daughters.

Hagen has organized and presented a series of State Bar conferences on environmental and land use law.  He also has extensive experience teaching law at universities and seminars, volunteers his time as a mentor for the Humboldt Teen Court, and is a graduate of the Cascadia Center for Leadership.

He currently serves on the Arcata Planning Commission, on the Humboldt Working Group of the PG&E WaveConnect project, and is a member of the Eureka Rotary Club. In his free time, he is an avid open-water swimmer and triathlete.

Hagen believes that political campaigns should be about the community’s common future and are the highest expression of the will of the people in a self-governed society.

“I’m looking forward to a positive campaign based on values, vision and the ability to lead,” he said.