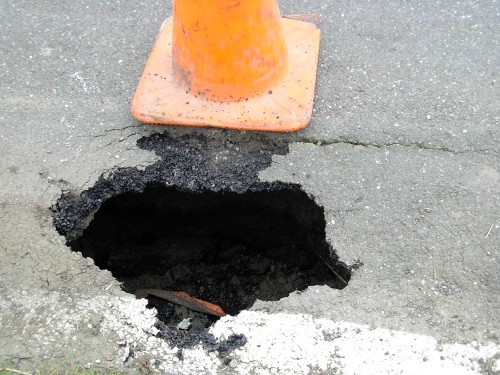 Yeah, well, OK. Fess: It's not that big of a deal. But we were so hoping it was. Hoping, that is, that the sinkhole on Eel River Drive, between Copenhagen Road and CANNIBAL Island Road, was a great, gobbling thing consuming pavement like a John McPhee pickerel  -- a tasty little fish JM stalks in the Feb. 8, 2010, issue of The New Yorker that mostly spends its time lazing about sleepily, but occasionally darts awake and eats its brother. Rapidly. Voraciously.

Alas and rejoice: Our Eel River Drive sinkhole is (so far) a sleepy pickerel. Says Tony Seghetti, Construction Supervisor with the county's Department of Public Works, the sinkhole opened up on the shoulder of the road, above a culvert, right after the Jan. 9 earthquake. Says he:

When it started it was about three or four inches. It kept getting bigger. But it's only about a foot, now.

Nevertheless, Public Works is going to investigate. And here's where you may actually glean something useful from this post: Eel River Drive will be closed from March 8 to, roughly, April 2. Although, Seghetti says, the investigation might be finished sooner. During the closure, people needing to get to Copenhagen Drive can take the Hookton Road instead.

Meantime, you should really read about John McPhee's pickerel (if you can get in)  -- the story is as much about a greedy little fish as it is about a son, his dying father, and their escape from the confines of a cold medical drama. Nothing about pavement or sinkholes, 'fraid to say.