Big rigs, many of them empty log trucks, blared support as they passed the 25 or so protesters, most from local tribes, gathered on both sides of Highway 101 Tuesday afternoon in front of the Red Lion Hotel in Eureka. Inside the Red Lion, the California Marine Life Protection Act Initiative Master Plan Science Advisory Team was about to begin its seventh session since the process to develop Marine Protected Areas on the North Coast began. On the agenda, among other updates, was a briefing concerning traditional tribal uses of marine resources in the study region.

A car rolled by, and from a window a man with a bullhorn bellowed, "MLPA! Taking Our Tribal Rights Away! MLPA! Taking our tribal rights away!" A sign held by Yurok Tribal member Sammy Gensaw and Yurok employee Beorn Zepp -- here on his day off -- said the same thing. Gensaw, 16, has lived at the mouth of the Klamath River, in Requa, his whole life. He said he was worried about his tribe's ancestral gathering rights being taken away through the MLPA process -- which is creating marine protected areas up and down the coast, in some cases closing off areas from all kinds of resource extraction. Said Gensaw:

We've taken care of these lands for thousands of years, and the resource has always been abundant. But now it's our fault that it's depleted?

Gensaw gathers mussels, seaweed and a tiny little black creature with a spine that clings to the rocks.

You scrape them off the rocks, boil them in a big pot, peel the backbone off, and you eat them. They're awesome.

Gensaw and the other tribal protesters -- Yurok, Hoopa, Karuk and some from other regional tribes in Mendocino and Del Norte counties -- were calling themselves the Coastal Justice Coalition. It's an offshoot of the Klamath Justice Coalition, which has protested against everything from the Klamath dams to the Six Rivers National Forest's fire management.

On another corner, Hoopa Tribe member Laura Peters, held a sign that said, "Don't mussel us out!" Said Peters:

We're here to help preserve our natural resources -- our mussels, our eel, our salmon," she said. "We go down to the ocean to fish every season. My brother goes down there for three to four days and nights just to eel. And my niece, she gathers spruce root.

Her 19-year-old niece, Audrey Peters, stood nearby. She said the MLPA won't impact the gathering of spruce roots, which are used to make bowls. But other federal entities have closed off areas her tribe's always collected the roots, and other material, in. The MLPA, she said, is just another example of such intereference with tribal traditional activities.

The man with the bullhorn, now out of his truck and on the sidewalk, began to shout:

Another log truck, its forks empty, passed by, laying on the horn, and Laura Peters followed it with her eyes:

That guy knows how it is, because his industry has gone away too. Everything is connected to something.

At 1 p.m., the protesters filed into the Red Lion and walked down the hall into the meeting room. The SAT members were in their seats up front. The audience section filled up with the protesters. Molli White, a Karuk and member of the Klamath Justice Coalition, laid a large white posterboard on a side table and began felt-penning in black and red the words "MLPA" inside a large slashed-out circle. Said White:

We're here to support the native right to gather -- something we've been doing since time immemorial. I brought my kids here today because it's their future this is affecting. 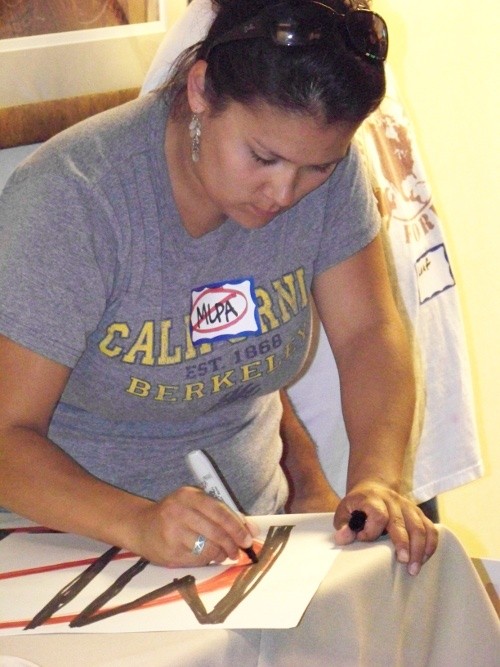 With the sound of White's pen squeaking loudly in the background, the SAT members began to introduce themselves one by one. After those formal introductions, a woman in the audience stood up and said her name and tribal affiliation. And one by one, nearly everyone followed suit.

And then the meeting commenced.

Outside in the hall, meanwhile, Stephen Kullmann was just arriving. Kullmann is the Wiyot Tribe's environmental director, although he's not Wiyot. He was here to represent the tribe, he said. And the Wiyot Tribe, like some others, was upset that no Wiyot had been appointed to be on the MLPA Regional Stakeholder Group for the North Coast. And, despite discussions between the tribe and MLPA folks, he said there had been insufficient give and take between the SAT and the tribes in determining what, if any, impacts could be attributed to tribal traditional gathering. Said Kullmann:

Once again, Western Science is going to dictate to the tribes what the environmental impacts of their traditional activities are. It seems like tribes are being punished all over again. There've been impacts to fisheries, but not by the tribes. And there've been proposals that would impact traditional gathering areas, that would be in MPAs.

And yet, Kullmann said, if the tribes ask for these gathering grounds to be excluded, Fish and Game responds that the State of California doesn't have the authority to grant "special" rights.

But the tribes are saying, it's not "special" rights. It's existing rights.