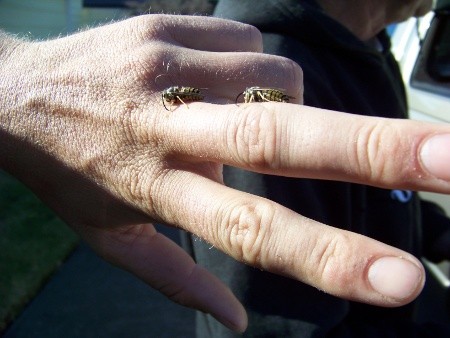 According to Anne Sexton, the poet, the hornet really is out to get you. You. "He would get in the house any way he could ... looking for you," she wrote in the poem "Hornet."

Do not sleep for he is there wrapped in the curtain.

Do not sleep for he is there under the shelf

Do not sleep for he wants to sew up your skin,

he wants to leap into your body like a hammer

And, apparently, when he's not actively looking for you, potentially murderous Hornet wants to lure you to him:

he wants you to walk into him as into a dark fire.

Which is why, when most people see a hornet, they run. Which, according to hornet-hunter Jim Weidert, is a stupid thing to do.

You don't run, says the retired schoolteacher from Grass Valley, who with his wife and kids has been relieving Humboldt County residents of their hornets nests since 1973. No quick movements. If one lands on you, don't blow on it, don't squeeze it, don't swat it, don't wave your hand at it or otherwise annoy it. Just be still. Let it walk around a bit on your prickling skin. Then gently flick it.

Don't run. Because Hornet will follow you, yes, right into your house or your car or wherever it was you thought you might hide. And hundreds of siblings might join the hot pursuit. (But if you are stung, then do run: The stinging releases an alarm pheromone, inciting that sibling gang for certain into pursuit. Run, run and hide in that house or car.)

Although, caveat: Anne Sexton's hornet is a put-on. It is a "he." And a he-hornet is a drone, and drones don't have stingers. You really could let him walk around on your hand waggling his long, handlebar-mustachio antennae, tickling you with his six dainty feet. But he would not, could not, sting you. You could take him for a pet, feed him apples and strawberries if you like, offer him sips from your soda.

It is She you don't want to anger.

For more about hornets and yellowjackets and the Weidert family's summer-fun-money profession, check out this week's Journal, on the stands now and online tomorrow. And to read Sexton's poem, go here.