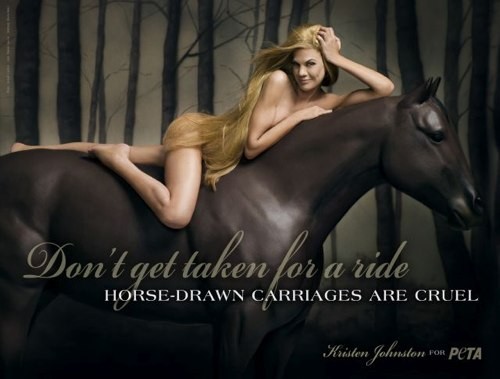 Responding to last weekend's carriage ride accident in Old Town Eureka, the activist group PETA, or People for the Ethical Treatment of Animals, this morning sent an "urgent letter" to Eureka Mayor Virginia Bass and the Eureka City Council calling on them to ban horse-drawn carriages in the city.

"Forcing horses to pull heavy loads is cruel, and it's always an accident waiting to happen," PETA Director Debbie Leahy said in a press release. "This tragic incident should be a wake-up call to the people of Eureka," she added.

In the letter, PETA asserts that "similar incidents have occurred in nearly every city in which horse-drawn carriages operate, often injuring or killng horses, motorists, onlookers, carriage operators, and passengers."

A call to Bass was not immediately returned.

[UPDATE, 3:55 p.m.: Bass returned the Journal's  phone call this afternoon, saying that she'd received PETA's letter and sent a response, urging the group to air its concerns at the next City Council meeting on Aug. 17. (The e-mail was sent by a PETA official in Washington, D.C., though the group does have active members in the local community.) The council could then decide to put the matter on a future agenda -- or not.

Bass said that, personally, she believes carriage driver Marty L'Herault and his horse Cinnamon have become an integral part of Eureka. "They bring a little magic to Old Town," the mayor said. "I just want to give total support to what Marty's doing and hope he and Cinnamon are back out there soon."]