The Eureka Fire Department responded to a fire at the Quality Inn located at 1209 4th St. in Eureka Friday morning. Flames were said to be visible coming out of a second story room upon the arrival of rescue workers, but were extinguished. At this time, the cause of the blaze is unknown. No one is believed to have been injured. 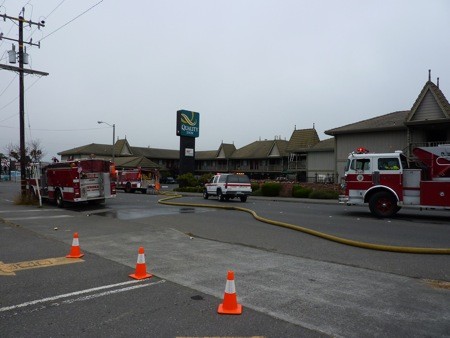 At 0732 hrs this morning the Eureka Fire Department and Humboldt Fire District #1 responded to a reported structure fire at the Quality Inn, 1209 4th Street, Eureka.

On arrival, the responding units found three second floor rooms fully involved and fire extending down the breezeway. Firefighters advanced hose lines up the stairs and extinguished the fire.

The three rooms were heavily damaged and there was- damage to two additional rooms. There was minor extension of the fire into the attic.

One subject was evaluated by ambulance personnel after breathing smoke but was not transported to the hospital.

The cause of the fire is under investigation.