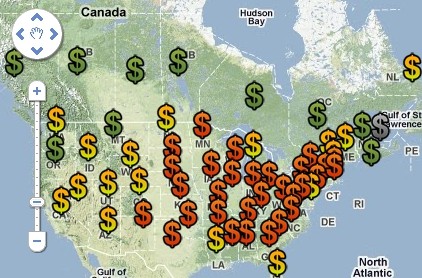 You ever read or watch a news story in which they mention the "street value" of some marijuana bust and think to yourself, "That doesn't sound right"? Of course you have. And so have the guys behind priceofweed.com, a website and blog that's compiling and reporting market data on marijuana sales from all over the world.

Submissions are rolling in rapidly as the site has been covered by CBS News, Business Insider, Seattle Weekly and others. Visitors to the site are invited to report the particulars of their most recent buy, including location, price and even quality of the bud. The Journal reached the site's creators via e-mail. Here's what they said:

Our names are Cory and Andy. We're Web developers and Internet entrepreneurs. We're from Toronto, Ontario Canada, and we just finished college. PriceOfWeed was born out of a personal curiosity; I was watching a National Geographic documentary about marijuana prices, and they threw out some numbers that didn't sound too practical. I realized that since it was a black market, nobody was sharing information, so there was no real way of validating price estimates.

We whipped the site together and posted it on Reddit and HackerNews, which [generated] a really great response. Once we had enough data, we expanded some of our features and added a Googlemaps visualization. From there, it took off on its own, getting covered on Time.com, CBSnews.com, Gawker, Business Insider, and we just did a phone interview with a reporter for ABC news. We plan on continuing to build out useful/informative features; we already have a social metrics measurement started (getting people to rate the social properties of their areas, such as law enforcement, social acceptance, etc.).

It'll be interesting to watch how these data are affected should Prop 19 pass in November. The latest price in California is just over $365 for an ounce of high-quality. Sound right?