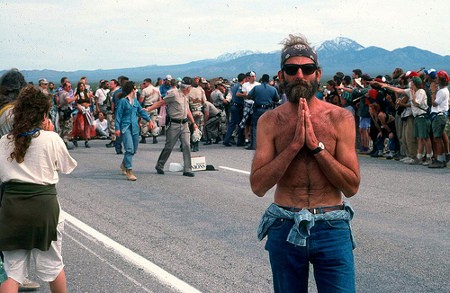 Rick Springer protests at an anti-nuclear demonstration near the Nevada Test Site in 1992. Photo from Flickr user Mark Bult.

Rick Springer, a former Humboldt County anti-nuclear activist who briefly became famous when he stormed a Ronald Reagan award speech in 1992, died Sunday earlier this week at his ranch in Gerlach, Nevada. He was 59 years old.

Earlier today, Steve Finnell of the Washoe County Coroner's Office told the Journal that his office was undertaking a medical examination at that moment. He said that it was still too early to ascribe a cause of death, but that Springer had suffered "some sort of traumatic injury."

We're waiting to hear back from the Washoe County Sheriff's Office, which is currently conducting an investigation.

(UPDATE, 3:46 p.m.: Lt. Darin Balaam of the Washoe County Sheriff's office tells the Journal that a coroner's report won't be available for a couple of weeks, but that he would be very surprised if the report revealed that there were anything suspicious about Springer's death. Also, he said that his office first heard about the death at 7:27 a.m. yesterday morning, making the time of death originally reported above somewhat uncertain.)

Springer was married just two weeks ago, according to a local friend who attended the ceremony.

Springer's famous confrontation with Reagan formed the basis of his book, Excuse Me, Mr. President: The Message of the Broken Eagle. Clips of that moment are preserved on YouTube.