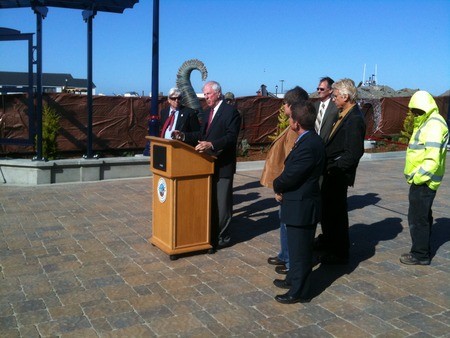 There was a pretty impressive turnout at the dedication of Eureka's new C Street Market Square earlier this morning, and why not? The square, located down at the bay, was the first-phase roll-out of the City's biggest and most impressive new public space since the construction of the Boardwalk, which it borders. By this time next year, the square will anchor the Fisherman's Terminal complex, which will include a fresh-off-the-boat seafood market, a cafe/restaurant and a permanent building for the Old Town Carriage Company, which is recovering nicely.

Mayor Virginia Bass kicked the speechifying off with by thanking all the dignitaries in attendance, including city staff, and by giving a little historical perspective on the importance of the Eureka Waterfront throughout the city's history. Then she introduced Rep. Mike Thompson, who found federal money to fund the project.

Continuing Bass' theme, Thompson led with one of his customary quips. "I think I smelled the clam chowder from Lazio's as we came in here," he said, to appreciative chuckles from the many who remembered the iconic Eureka seafood restaurant once located not far from where everyone was standing.

But idle jollity did not stay with Thompson for long. He noted that "earmark" had become a dirty word in the national political discourse -- and yet, he emphasized, this project right here was funded through such means.

"This was an earmark our community needed," he said. "There is a stark difference between a community revitalization project like this and a bridge to nowhere."

More pics below. Sorry -- the battery on the good camera died and I was reduced to iPhone snaps.

Market Square is home to a bevy of impressive public statues, some of which, unfortunately, look too fragile to withstand either the gale-force winds coming off the bay this morning or the vandals who will surely arrive on the scene soon. 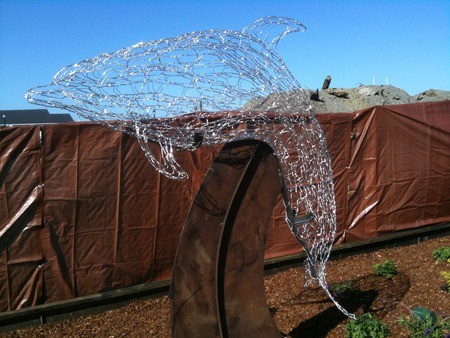 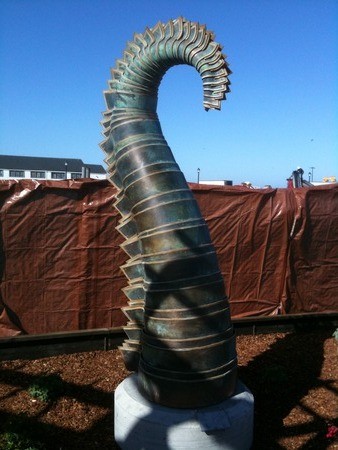 The latter seems to be an example from the "weird animal tail" school of public statuary that is sweeping Humboldt County.

Some teabaggers made the scene to sneer at Thompson.

Though the signeage mainly taunted Thompson for refusing to debate his Republican opponent, Loren Hanks, literature handed out by the Party of Tea members on hand softened this somewhat: Thompson and Hanks, have in fact agreed to two debates later this month. The literature chided Thompson for not agreeing to four debates. The other two, which were proposed by the Hanks team, would have taken place around now.