(Update at bottom of second page)

A 19-year-old woman clung to a slippery sandstone cliff about 150 feet above Agate Beach for at least three hours Sunday afternoon as a rescue crew worked its way through a wild section of Patrick's Point State Park to get to her. The whole while, an orange Coast Guard helicopter circled the scene.

Earlier, down on the beach, beachcomber Joy Graves had been walking along when she heard a voice crying "Help me!" She looked up the steep lumpy cliff with vertical drop-offs and saw a woman sitting with her legs stretched out perilously close to the edge of one of the dropoffs. "I don't want to die!" the woman cried, recalled Graves later, still down on the beach, as she watched the crews working methodically to set up their rescue.

Graves, from Oregon, said she called 911. After more than an hour, it seemed to her, rescuers arrived. A man in a yellow slicker from the Westhaven Volunteer Fire Department took a post on a lower ridge of sandstone by the beach as the main rescuers assembled in the forest at the top of the cliff about 100 feet above the stranded woman. CalFire trucks staged in the Agate Beach parking lot. A Sheriff's deputy scrambled down the less steep upper section until she was about 50 feet above the woman and stood sentry, appearing to coach the woman to remain calm.

Just after 4:30 p.m, finally, after an excruciatingly long time, a man in climbing gear and a white helmet rapelled down to the woman and, after a long time of securing her to the rope, they slowly ascended, the woman in front of him and appearing to be having difficulty standing. Meanwhile, a con crew in orange jumpsuits had arrived on the wooded clifftop edge south of the rescue scene and was chainsawing a path out of the undeveloped section of park. By 5:30 p.m., the rescuer and rescuee were on safe ground.

After the rescue, a couple of park personnel talked about the event in the Agate Beach parking lot. They said the area above the cliff face where the young woman had ended up stuck -- with a sprained ankle, they said -- was a less well-traveled part of the park and the rescue team had been led there by a park employee who knew it best. They hadn't heard yet what circumstances had led to the woman's stranding. One of them opined, a bit admonishingly, that these sorts of rescues were all too common in the park.

Joy Graves, in the long coat, left, heard the woman calling for help.

Help arrived. The woman is just above the two dark parallel gashes in the cliff, to the left and about midway down in the photo. 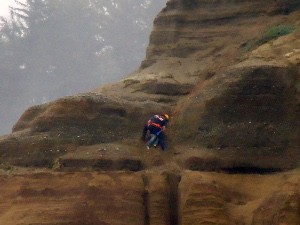 A rescuer maneuvered her slowly up the crumbling cliff.

After it was over, sentries posted on the beach ascended to the parking lot.

Humboldt County Sheriff's Deputies responded to Agate Beach Sunday afternoon after receiving a report that a woman was stranded on the nearby unstable bluffs. At about 2:30 p.m., personnel with the California State Parks requested assistance with the cliff rescue. Eight members of the all-volunteer Sheriff's Posse responded to the beach and were able to get a harness and rope on the woman. The U.S. Coast Guard launched a helicopter to assist, however, they were limited by foggy conditions. Meanwhile, personnel from the California Department of Forestry and Fire Protection (CAL FIRE) secured a "Z-rig" to pull the victim up the cliff-face. At the top of the cliff, an inmate fire crew worked to widen the trail for the trucks. The victim was safely brought to the top of the cliff. State Parks personnel then drove her to her car. The victim was identified as Rochelle Machado, 19 of McKinleyville. Machado was cold and complained of pain in her ankle.