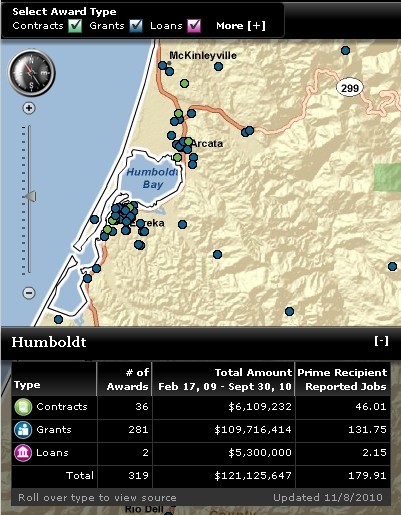 $121,125,647 to be (more or less) exact. That's how much of Uncle Sam's money flowed into Humboldt County between February 17, 2009, and September 30, 2010, as a result of President Obama's American Recovery and Reinvestment Act of 2009. And the vast majority of that cheddar has been in the form of grants.

If you haven't yet noodled around on Recovery.gov, you're missing out on a cornucopia of accountability. For example, you can break down the data in a variety of ways -- by recipient, zip code, county, Congressional district, state and more -- plus interactive maps provide even more data.

Here's a brief breakdown of the county numbers:

The effects of these funds are incalculable, but the coin of the realm for many commentators and pundits (who vastly oversimplify matters, some would argue) has been the number of jobs created. According to recipient reports, here in Humboldt County we've seen fewer than 180 jobs as a result of these monies. In case you're curious, that works out to an average annual salary of $673,256.88.