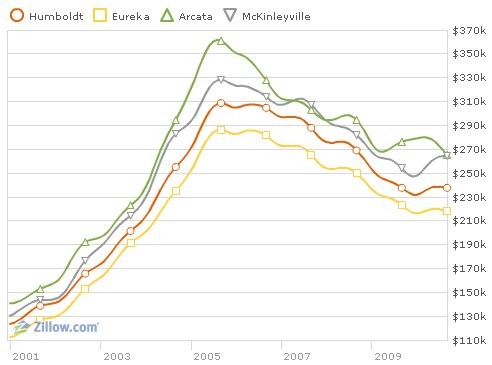 The median price of a house sold in Humboldt County has dropped to its lowest level since March of 2004, according to data released today by the Humboldt Association of Realtors (HAR). The October value of $238,000 represents a 32 percent decline from the peak of the housing bubble -- in March, 2006 -- when the median-priced county home went for a whopping $349,500.

Add in an average 30-year mortgage rate of 4.62 percent -- the lowest rate on record -- and you have the strongest buyers' market in years.

At the risk of statistical overload, here's another informative way to view the current market's overall health: Standard or "conforming" mortgages (as in the kind most everyone got before lenders went apeshit and starting giving loans to everyone, including dead people) require that your monthly house payment not exceed a third of your gross income. That's how much banks figure your family can handle without falling into debt.

In Humboldt County we hovered right around that healthy ratio until 2002, when mortgage payments began their perilous climb. At the peak of the bubble, the average local mortgage payment was a ridiculous, completely unsustainable 67 percent of the median county income. In other words, homeowners were paying roughly twice what they reasonably should have been paying on their house payments.

The October number is back down to 34 percent, the lowest it's been since March of 2002.