Dean Singleton Out as MediaNews CEO 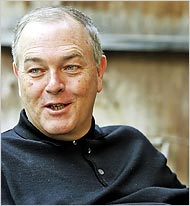 William Dean Singleton, the chairman and founder of Denver-based MediaNews Group -- which publishes the Times-Standard among dozens of other newspapers -- is stepping down as that company's CEO.

The company announced the move yesterday in a thicket of corporate-speak that offers hints of the troubles faced by daily newspapers in the shifting media landscape. Singleton will stay on as executive chairman of the company's board, but company president Joseph Lodovic has retired, effective immediately, and the board of directors has been replaced.

According to the company's statement, these moves will "...continue the transformation of the business from a print-oriented newspaper company to a locally focused provider of news and information across multiple platforms."

Having accumulated more than a billion dollars in debt, MediaNews Group last year filed for Chapter 11 bankruptcy, but thanks to a crafty reorganization plan Singleton and Lodovic were able to retain their leadership roles while offloading nearly 90 percent of that debt. However, the deal also gave senior lenders (read: banks) controlling interest in the company's stock. This, in turn, gave those lenders the ability to reorganize the brass as they see fit.

Industry analysts are also speculating that Singleton's long battle with multiple sclerosis could play a role in the decision. The company has not yet found a replacement.