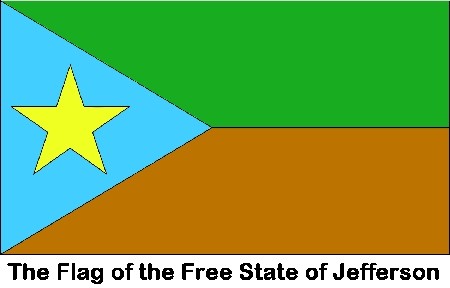 Well, heck, we've got an update already to this week's news story about some discontented Southern Humboldters and their efforts to grab the reins of their wayward economic and social buggy. Apparently, they DO want to secede from the rest of the county. Or, some of them do.

That's the latest from CetanSka David Sky, who lives in Harris, a mountain stronghold just a hop, skip and 27 mile jump east of Garberville. When last we spoke with him, he was co-plotting a meeting for this Wednesday for everyone to get together and talk about their various community issues in southern Humboldt and northern Mendocino. Sky isn't pushing for secession, but he said that Solar Dan Glaser was. But Glaser, when reached, insisted he simply wanted to talk incorporation -- as in a big municipality called, say, Emerald City.

But then, today, the day after that meeting, we got an update from Sky:

There [was] a presentation with a partial constitution to secede from the state creating a Redwood Region/Free State of Jefferson...

So we emailed Sky for more info. And he said:

... the individual who represented the presentation has asked me
not to mention his name to the media as you know this falls under the laws of treason with the federal government.

OK. But it's not a new idea, of course, as even Sky notes. And there've been many such movements previously, here and elsewhere.

Sky kindly passed on the anonymous gent's very-draft constitution for his proposed new free state (for which he also created that flag up top and provided meanings of the colors). You can read it at the end of this post.

Besides secession, the round tablers talked about Glaser's proposal to incorporate the SoHum-NoMendo area "into a township of sorts creating an Emerald City/Bio Plex that encompasses a bubbled area from Piercy to Redway." And, they discussed Sky's particular desire to appoint a lobbyist from their area to keep the county supervisor informed.

The round tablers agreed to come back to these proposals in April, at which time they would also work on creating a Pratt Mountain/Harris Volunteer Fire District, round up some volunteers and get water tanks up in those hills.

AND NOW for that partial constitution (be sure to read the last article, if nothing else):