SACRAMENTO - Governor Jerry Brown today issued an emergency proclamation for Del Norte, Humboldt, San Mateo and Santa Cruz Counties following the 8.9 magnitude earthquake and tsunami off the coast of Japan, which generated a water surge along the California coast, causing damage to ports, harbors and infrastructure.

WHEREAS on March 11, 2011, an 8.9 magnitude earthquake in Honshu, Japan generated a tsunami; and ... the effects of the water surge continue to threaten the counties of Del Norte, Humboldt, San Mateo, and Santa Cruz; and ... the counties of Humboldt and Santa Cruz proclaimed a local emergency; and ... Del Norte and San Mateo are expected to issue proclamations of local emergency; and ... the circumstances of this tsunami and water surge, by reason of their magnitude, are or are likely to be beyond the control of the services, personnel, equipment and facilities of any single county... THEREFORE, I, EDMUND G. BROWN JR., Governor of the State of California... HEREBY PROCLAIM A STATE OF EMERGENCY to exist within the counties of Del Norte, Humboldt, San Mateo, and Santa Cruz. IT IS HEREBY ORDERED that ... California Emergency Management Agency (Cal EMA) ... provide local government assistance under the authority of the California Disaster Assistance Act.

The full text of the emergency proclamation can be found here.

The tsunami warning for California and Oregon has been downgraded to an advisory. The advisory continues from Point Concepcion to the Oregon-Washington border. According to NOAA, "Persons in low-lying coastal areas should be alert to instructions from their local emergency officials. Persons in tsunami advisory coastal areas should move out of the water, off the beach and out of harbors and marinas.

The Crescent City Harbor has been destroyed, according to the L.A. Times. Four people were swept into the sea, one of whom is feared dead. 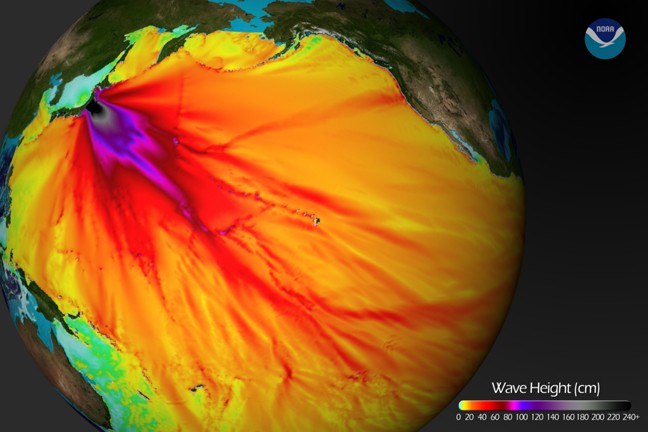 NOAA tsunami wave height graphic. Can anyone explain why the red plume moves north straight for us?

Meanwhile, here's the latest information from the Coast Guard:

Crowds have been gathering at the end of Murray Road in McKinleyville to watch the mouth of the Mad River. Here we see the river running backward. The surge is lead by a one-two foot foamy wave. [photo by Judy Hodgson] 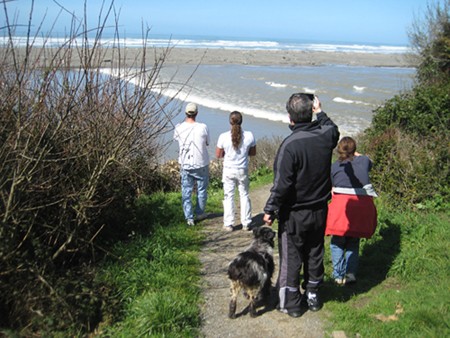 UPDATE 11:15: Joint press release issued by the county and city of Eureka:

In response to a tsunami warning issued for the coastal areas of California, the Humboldt County Sheriffs Office has enacted VOLUNTARY evacuations for the low lying areas of Humboldt County and recommends residents in those areas move to higher ground and inland. The Humboldt County Office of Emergency Services is advising this is now a declared disaster. The Turf Club at Redwood Acres has been established as the evacuation center.

PG&E has cancelled rolling outages and resumed full operations although the town of Orick remains without power. The first wave hit our coast at approximately 0730 hrs. in Shelter Cove with about three-foot waves. California Highway Patrol is reporting waves just under five feet high with confirmed damage to Crescent City/Commercial Fisheries & piers with waves still incoming and 35 boats damaged.

Unusual wave actions are being seen at Woodley Island, Stone Lagoon, & the mouth of Mad River. Wave action has washed over US 101 @ Freshwater, but has since receded with no reported damage. This is the beginning of this tsunami event. The first waves may not be the only waves nor the highest, and wave action may last as long as 12 hours after the first wave. DO NOT go to "watch" the wave.

Listen to LOCAL TV, radio, and NOAA weather radio for further advisories and instructions. We are also recommending residents with access to a computer go to www.humboldt.edu/rctwg/ to see if their location is within the threatened areas. Avoid unnecessary travel if you are already within a safe area. California Highway Patrol has closed US 101 North of Orick at the 101 bypass, and south of Orick at Kane Road. Arcata Police Department has closed westbound US255 @ `K' St.

UPDATE 10:45 a.m.: Slate magazine this morning posted a story about Crescent City, which they dub "the tsunami capital of the continental United States." Meanwhile, Congressman Mike Thompson sent the following e-mail a few minutes ago:

SACRAMENTO - Governor Jerry Brown today issued the following statement on the earthquake and tsunami in Japan, and the tsunami warning in California:

"Our thoughts are with the people of Japan as they endure this tragedy. I have directed California's Emergency Management Agency (Cal EMA) to make state resources available to the Japanese government, and we stand ready to assist them. Cal EMA has been on full alert since early this morning, and tsunami warnings were issued for the state's coastal areas. I urge Californians living in affected areas to follow all instructions from state and federal response agencies."

UPDATE 8:15 a.m.: The Samoa bridges are closed due to the tsunami warning and emergency officials are attempting to evacuate coastal areas. PG&E has shut down the Humboldt Bay Generating Station as a precautionary measure. As a result the county is experiencing rotating power outages. Customers are urged to conserve electricity.

Original report: A massive 8.9 earthquake hit off the coast of Japan last night, triggering a tsunami that has killed hundreds and left thousands more missing. There is a tsunami alert in effect for the west coast of the United States. Here's the alert for Humboldt County issued this morning:

Residents of Humboldt County are waking up this morning to a tsunami warning which has been issued for coastal areas of California due to a strong earthquake that occurred at about 9:46 last night near the east coast of Honshu Island, Japan. While our thoughts and prayers go out to the people of Japan, our immediate concern is protecting the coastal residents of our community.

A tsunami warning means that all coastal residents in the warning area who are near the beach or in low-lying areas should move immediately inland to higher ground and away from all harbors and inlets, including those sheltered directly from the sea. At this time, warning sirens are being activated in coastal areas of Humboldt County to notify residents of the strong possibility of tsunami waves.

Law enforcement is advising residents to go to higher ground until wave action subsides, which may be as long as 12 hours after the first wave. Residents are reminded that the first wave of a tsunami event will likely not be the strongest. Residents should listen to local media or NOAA weather radio for updates.

RESIDENTS ARE ASKED NOT TO CALL 911 UNLESS AN EMERGENCY EXISTS AT THEIR LOCATION.

The list shows no response from Bridgeville and Kneeland schools, officials assume this is probably because they were scheduled to attend a Math Fair today at Arcata High, which has been cancelled.