Local Company Teams With Lowe's to Give Away 1 Million Trees

Actually, we doubt too many people will object to the massive tree giveaway being organized by Lowe's Home Improvement Centers across the country, featuring live seedlings that even now are being sorted, packaged and shipped from the relatively tiny Jonsteen Company in Dow's Prairie. 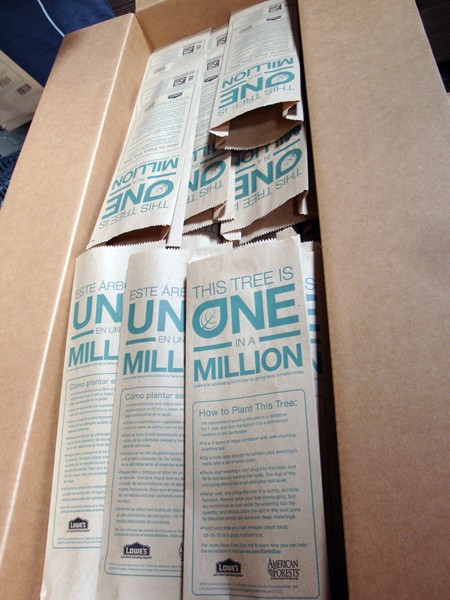 In celebration of Earth Day, Lowe's will be giving away hundreds of seedlings to customers at each of its 1,700-plus locations (the closest one to us is in Redding) this Saturday, with the total planned giveaway reaching one million baby trees.

Preparing the packages has been a monumental undertaking for the Jonsteen Company.

"We've had crews working 24/7, in three shifts, since the beginning of April," co-owner Jonathan Claasen said by phone this afternoon. "It's been an exercise in crowd control."

"This is by far the largest single-day tree-planting event we've ever been a part of or even heard of," Claasen's partner Steen Christensen said in a press release. (Put their first names together and you'll see where the company gets its moniker.)

Claasen said they've enlisted help from everywhere they could find it, including their employees' friends and spouses, plus about 30 temporary workers hired through Express Personnel. Claasen's wife and Christensen's parents have been providing homemade cookies for everyone. "We've been trying to make it as fun as possible, but boy, it's a pretty long haul," Claasen admitted.

Jonsteen has been involved with large-scale tree giveaways in the past, partnering with the likes of The Smithsonian Institution, FedEx and Whole Foods. In 2008 they coordinated a major nationwide tree giveaway for Macy's. "But even as large as it was, the Macy's distribution was only about 10 percent of what Lowe's is doing," Claasen said.

The company will be providing Giant Sequoias and Coast Redwoods to many California locations. But because of the sheer volume of trees necessary for the effort, plus the widely varying climates across the country, Jonsteen sourced many seedlings from other nurseries.

"We have palms for Hawaii and Southern Pines for the South; super cold-hardy stock for the Northeast; and wonderful mountain trees for the West," Christensen said. In all more than 40 different species will be used for the Lowe's giveaway, including rare specimens such as Korean and Japanese Fir, various Larches and Hemlocks, Bristlecone Pines and Black Hills Spruce. (If you don't want to drive to Redding for a tree -- and well you shouldn't -- you can order some here.)

Lowe's tree recipients will have the opportunity to "register" their trees online, then see where other trees are being planted across the country and interact with fellow tree-planting enthusiasts. The big-box retailer issued its own press release, saying, "When planted, these one million trees will eventually produce more than 260 million pounds of oxygen annually, providing air for more than 670,000 people for one year. (More info here.)

How exactly did a McKinleyville business with three windblown greenhouses end up supplying "the largest tree event in history" for a Fortune 500 company headquartered in North Carolina?

"Jon and I could probably answer that in various ways," said Christensen in his press release. (Clearly they anticipated this question.) "In the end it comes down to the unique and potent animal that is The Jonsteen Company. We are a tree company uniquely equipped for precisely this kind of thing, and we bring to bear a long history both growing trees and strongly advocating for more emphasis on tree planting and tree education in urban America."

"Plus, we have a high tolerance for eating at Waffle House restaurants," Claasen joked. He added, less jokingly, that securing the deal took about four years, dozens of conference calls, hundreds of emails and several trips to North Carolina. Today was the last-minute rush: Claasen said they hope to have the last seedlings in the mail by tonight.

However, he added that they might have to overnight some to Burbank tomorrow. Why? Because Ellen DeGeneres wants to give a tree to each member of her studio audience sometime next week -- a more environmentally friendly gift than some distribute.

The owners of The Jonsteen Company gave credit to Lowe's for doing more than just "greenwashing" themselves as a PR stunt. "Instead of promising to support some vague reforestation effort in some distant locale or 'give a portion of the proceeds' to some perhaps-worthy charity or environmental cause, how about this: Here's a tree. Plant it! Figure it out. That's real," Christensen said. "That's immediate. That's conservation at work right here, right now."

Claasen said that most of the trees they're sending out can live for up to 500 years. Others, like the Bristlecone Pines, can live for thousands of years. "This could have a really lasting effect on our country," he said.

Claasen and Christensen said they're encouraging Lowe's to make the tree giveaway an annual event. "This is all just part of Steen's and my plan to take over the world with trees -- from the most beautiful place in the world, Humboldt County!" Claasen said.

"And we'll do it without ever suggesting the need to log Richarson Grove," added Christensen.