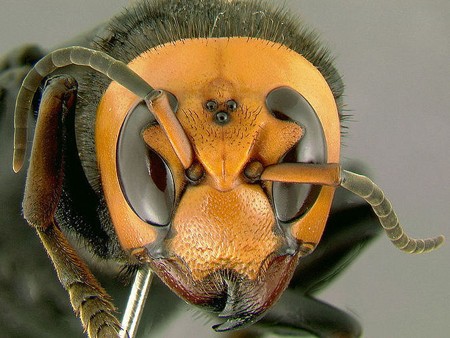 With her customary cheerful aplomb, Stewart tells of such nasty insects as the Asian giant hornet (pictured above), otherwise known as "the yak killer," the pork tapeworm, which will live in your brain if given the chance, and so-called "zombie bugs," a phenomenon that occurs when a particular wasp stings a cockroach in its brain -- thereby zombifying it -- then lays her eggs inside the roach's body. (The larvae later eat their way out. YouTube video here.)

Not all of Stewart's tales will make you want to seal your body in Kevlar. For example she corrects the unfair reputations of the black widow and brown recluse (arachnal profiling?).

Listen to the interview here and check out the ingenious Wicked Bugs trailer below.