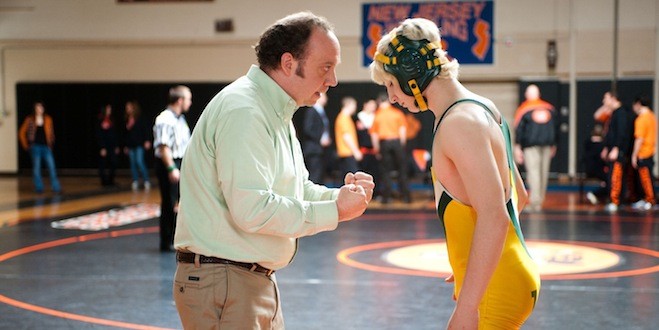 Regular moviegoers know not to trust trailers. In addition to regularly including plot spoilers and often, especially for comedies, revealing the film's best lines, the trailer can be significantly misleading. Such is the case with Win Win. From the trailer I saw too many times, I would have put this film down as a lightweight comedy. As it turns out, that is hardly the case with this fine film, even though it has its share of comedic situations.

For one thing Paul Giamatti, as barely scraping by attorney Mike Flaherty, is playing to his strength, which means he is the very picture of despair and depression. His character has good reason for despair. His attorney business is in the toilet, he's behind on paying the bills and the high school wrestling team he coaches on the side hasn't won a match in memory. His saving grace is his wife Jackie (the always excellent Amy Ryan) and their two young daughters, but even that seems tenuous.

But then he miraculously catches two breaks. A client he is representing (Leo, played by Burt Young) is declared incompetent and Mike gets appointed his guardian, which gets him a monthly check, and out of the blue Leo's teen grandson Kyle (Alex Shaffer in his film debut) materializes, trying to escape his damaged mother back in Ohio. And, wouldn't you know it, he was a champion wrestler back there.

Thus, Mike has achieved what seems to be a guaranteed "win-win" situation. But Mike has already sown the seeds of destruction. He puts Leo in a rest home and doesn't inform the court nor does he tell Kyle the real legal situation.

One would expect solid acting from veterans such as Giamatti and Ryan, but the real find here is the young Shaffer. Until an injury, Shaffer was himself a champion wrestler, a factor that brings realism to the wrestling matches, but he also brings a maturity to his role that is unusual. This is a heartfelt, affecting, worthwhile film. Rated (bizarrely) R. 106m. At the Minor.