The pre-wedding rigors that British royalty Prince William and his bride Kate Middleton endured before today's EXTRAVAGANZA must have been sorely trying. But they cannot compare to the primping rituals of the Budweiser Clydesdales, a team of which happens to be ensconced at Redwood Acres right now in anticipation of Eureka's own BIG DAY tomorrow -- the Rhody Parade! Huzzah!

Kate had to go on some kind of Dukan diet? Bah. These heavy footed lovelies have had to learn to live with their 2,000-plus poundage and to enjoy chomping up to 70 pounds of hay and grain each day.

Kate had to practice the royal wave, and Prince William, we presume, the bow? Hah. These gentle giants are all over it -- with all four feet.

And we dare not imagine how William and his princess cleansed themselves the day before the big affair. But we're absolutely certain it did not entail being scrubbed down by two men in rubber boots and Budweiser caps wielding hoses, sponges, "Mane 'n Tail and Body Shampoo, Kirk's Coco Hardwater Castile soap and a bucket of yellow sulfur powder to douse upon their legs to brighten their whiteness and, um, dry out any bothersome sores. 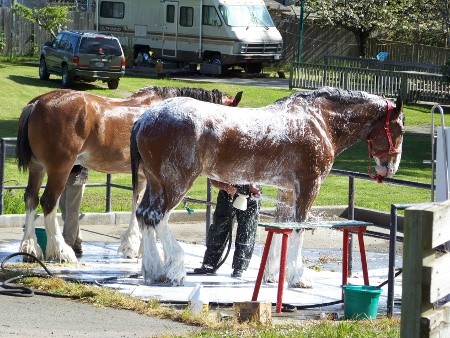 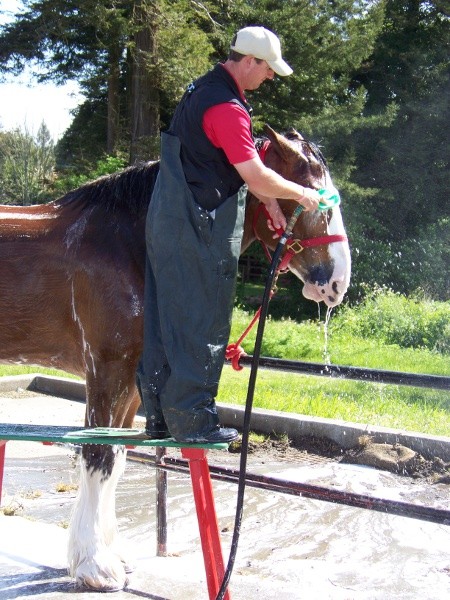