Here's a fun new playground for data hounds: The U.S. Census Bureau has created an interactive map that allows you to compare demographic data by state, county or city. So, for example, you can look at Humboldt County's race statistics and see that 81.7 percent of us are white (109,920 of 134,623). The next-largest group, American Indian and Alaska Native, is a paltry 5.7 percent of the total. 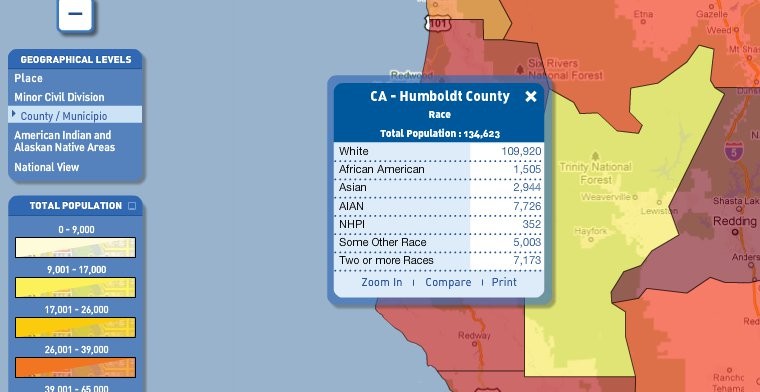 Then what you can do is compare us to our neighbors. Trinity County is even more homogeneous than we are (87 percent white), whereas Mendocino County has a bit more diversity (though they're still pretty pale at 76.5 percent white). Of our immediate neighbors, Del Norte County is the least honky-fied -- 73.7 percent white, 7.8 percent AIAN.

Almost half of Trinity County's population (48.7 percent) is 50 or older.

When you're done comparing things at the county level, you can dig deeper and compare city/town demographics. (Five African Americans live in Blue Lake (0.46 percent of the population) while nine live in Westhaven-Moonstone (0.83 percent)).

Anyway, you get the idea. Dig into the data, and let us know if you find anything interesting.