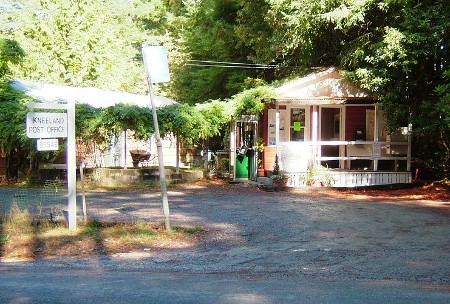 Heck of a party hubbub up there at the Kneeland Post Office today as neighbors wandered in in trickles and bursts to say goodbye to retiring Post Mistress Bonnie Lee Clark. Today was Clark's last day -- she worked 12 years at the tiny Kneeland outpost and 26 total for the Post Office in general.

Over the phone, around 3 p.m., her voice barely audible over the laughing and talking in the background, Clark said, "It's time to move on."

She seemed to be referring to more than her departure. By now, Kneeland folks have also heard that the Kneeland Post Office itself might be retired later this year. Could be they were also coming by to wallow in a bit of pre-emptive nostalgia. Anyone who's relied on that little white house with its 96 boxes might shed a tear right about now -- maybe it's where you got your mail; maybe you were on its delivery route of 230 more boxes; maybe it's where you referred to the community bulletin board when you had a need or a beef or a thing to peddle. Or maybe you just counted on it as a wayside respite after a long uphill slog by bicycle on the famed Kneeland route.

The rumor is that the lease has not been renewed for the little P.O., whose landlord is apparently a next-door neighbor. But the Post Office doesn't give out such information. An ending lease might be a reason to prompt the USPS to scrutinize a post office to see if it's a good place to save money, USPS spokesperson Gus Ruiz said over the phone this afternoon. He didn't know if that was Kneeland's situation (the regular spokesperson for this region was away). But he did say that the Kneeland Post Office is indeed on a list of P.O.'s slated for "potential discontinuance." That's potential.

"No decision has been made yet," Ruiz said.

He said the next step is to conduct a customer questionnaire and to hold a community meeting -- neither has been scheduled yet.

The USPS announced in January it would start closing about 2,000 post offices and that it was reviewing 16,000 more for possible closure; the service has been hemorrhaging for five years.

"In 2006, before the recession, when our volume [nationwide] was at its peak, we delivered 213 billion pieces of mail in the U.S.," Ruiz said. "That has declined to 175 billion. At the height, in 2006, we delivered six to seven pieces of mail to every address we deliver to. Now it's two to three pieces of mail per day per mailbox. So it's costing us the same to deliver fewer pieces."

Ruiz said the decline in volume is attributed mainly to the economic recession and a shift away from paper mail.

"A lot of our mail -- business-to-business, business-to-consumer and consumer-to-business -- has all gone to electronic conveyance," Ruiz said. "There has been a slight increase in standard mail -- advertising mail. But it's not significant enough to overcome the loss we're seeing with First Class declines. There's also been a decline in foot traffic coming into the post office to do business at the counter. "

Ruiz didn't know the particulars of Kneeland's situation. But he said the USPS is studying all of the post offices slated for potential closure to determine if they can save enough by closing them while continuing their mandate to provide universal service; the data collected in that study isn't public.

Well. The P.O. has had a rather bonny good run up there in Kneeland -- it has operated continuously from 1880 to present (except for one year, between 1891 and 1892, according to ye olde Wiki). And it ain't closed yet.

As today wound to a close up there around 4 p.m., Bonnie Lee Clark, the retiring Post Mistress, was closing out her career with a transfer of duties to the new Kneeland Post Mistress, Bonnie Stanfield.

"That's my rule, only Bonnies can work here," Clark joked.